Rising case numbers in the US don’t seem to be upsetting the markets. No-one seems to care in the US. One colleague got a text from a cousin in Washington DC yesterday saying that “everyone is just getting back to normal and they’ll handle the virus if they get it”. Here we are in Victoria with no loo paper again, a couple of hotspots and another text to a friend of ours, from a girlfriend they are going to visit in Sydney at the weekend, telling them they can’t come and stay because her boyfriend is concerned that they are from Melbourne. As Melbourne fund managers, we may just be missing the point that globally, especially the US and Europe, are re-opening their economies and nothing is going to stop them. 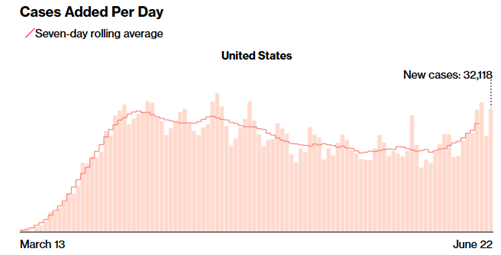 And there is something else we maybe haven’t worked out – that the virus is a “hotspot” thing – averaging cases across the US and expecting the whole US market to suddenly take notice could be another mistake, because the virus case number concern is not a ‘country’ thing, it is a state thing. In some states, the virus has gone cold – which suggests that it can be contained – and in other states, it is taking off again.

Which means that the ‘whole’ stock market is not going to suddenly respond, it is reacting incrementally every day to the situation in each state, each industry and each business. The hotspot nature of the virus also means that:

So maybe we worry too much. The virus may damage the economy relentlessly for years, but another big unexpected ‘moment’ is unlikely. We now know about the virus, how to manage it if needed, and it will not shock the market again, even if there is a relapse (which there is in some places).

Despite that, it is interesting to see that precipitous moment two weeks ago, and that 400 point drop in the Dow Futures mid-session yesterday on the story that the trade deal “is over” – which apparently it isn’t. Trade does matter it seems. The drops highlight the ‘spookable’ nature of the markets at the moment. It is a herd, it can move fast, it can be precipitous, but the point is that the headless moment in March, built on virus panic, is unlikely to repeat because we have processed the virus and it is unlikely to shock us again on a grand scale, just a local scale.