ASX Education: Your Best Investment Ever

I have an article in The Age Money section. It's one to send to your kids. Click below and read it online (it helps it go viral), or you can read it below. Or just copy and paste the image and the link and send it to the kids by email. 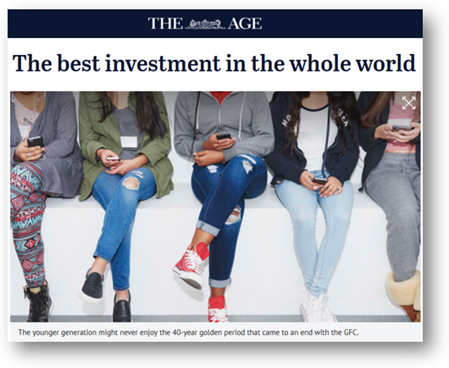 I have been conducting education courses for active investors and beginners. The beginner's course is called “An Introduction to Finance and the Stock Market”, and I have found myself in front of a younger audience trying to play catch-up with the older, perhaps luckier but certainly richer, generation.

It is irritating to them that seemingly less gifted people than themselves fluked 40 golden years of extraordinary property and stockmarket appreciation. Golden years that, since the global financial crisis, are by no means guaranteed to repeat. The younger generation might never enjoy the 40-year golden period that came to an end with the GFC.

The older generation, like myself, took out a mortgage the moment they could afford to. The advice at the time from our parents’ generation was to get on the first rung of the property market as soon as possible.

Of course, this was 1982, ten years into the credit boom, or more accurately, the “debt boom” that started somewhere in the early 1970s. The availability of debt has not been eternal. In those days you had to suck up to the banks, wear a suit to the interview, and promise them that your parents would repay every dollar if you didn’t. Only then would they begrudgingly open their wallets.

At the time, I was working for an investment bank in the UK, which, unprovoked by me or any other employees, suddenly offered us all flash company cars on a salary-sacrifice basis, and three times our salaries in mortgage loans at a discounted interest rate with fast-tracked approval.

We all suddenly went from poor renters in the scruffy outer suburbs of London driving beaten-up Mark III Cortinas to property-owning yuppies driving new Golf GTIs and living in Chelsea. I have been living with debt ever since.

Of course, some Australians got on the property ladder a little bit later than 1974, and you can now generally measure the wealth of an Australian by their age, which dictates when they started to take responsibility for themselves and, as a consequence, bought a house. They are now sitting on a handsome asset, and while it may appear effortless to the new generations, there is a lesson for younger people in their success.

The reason the Australian property buyer has made money stems not from the property market itself, although that has helped enormously, but from the enforced attitude to debt that comes with a large debt.

Property has forced property owners to be disciplined, to pay off capital, to control their spending, but most importantly, to get out of bed in the mornings with purpose. A mortgage, school fees, and not enough super (since super only started in 1991) are tremendous motivators. In fact, there is an argument, as evidenced by the miserable state of some of the very wealthy, that the more liabilities you have, including mortgages, debt, family dependents and particularly kids, the more you get out of life because the more you are driven to succeed through effort.

Now translate this to a generation that hasn’t fluked the property boom, and doesn’t have enough capital to exploit the synchronous stockmarket boom, and you have a conundrum. Do they now borrow a million dollars and get their foot on the first rung of the property market, or do they embark on aggressive stockmarket speculation in order to even things up between themselves and the lucky generations that went before them?

As any business owner will tell you, or as Robert Kiyosaki’s book Rich Dad Poor Dad will confirm, real capital is created by building assets, your own assets.

Go and make some money first, come back to the stockmarket later. There’s nothing for nothing here.