I don’t need to rewrite all the Royal Commission recommendations for you, so I’ll take those as understood. That said there are a few interesting observations this morning: 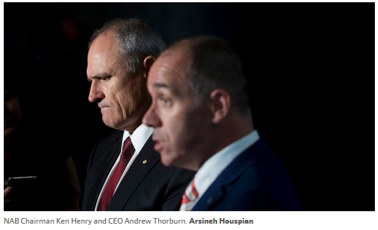 But you cannot combat culture with regulation. The bank sector culture will change when a bank executive says, behind closed doors, “We can’t do that” and the Hayne commission has gone a long way to creating the moment for that executive to change that culture. There is now a fabulous business opportunity for a bank to lead on culture. It will take a bold and probably unprofitable move but there are now literally millions of disillusioned bank clients on the move that will gravitate towards whoever takes the cultural lead.

It is like picking up rubbish on a running track. One person picks up a beer can, carries it for 500 yards, dumps it in the bin, is seen by everybody else, and before you know it, everybody is picking up beer cans, there is no litter and everyone is proud of their running track. Culture changes with one small act. It is in the hands of one individual, in one bank, to act and, in so doing, effect the culture change.

Individuals need to take some responsibility for their financial outcomes. They can only do that if they come up the curve on financial literacy. My son Archie has chosen money markets and business as VCE subjects and as a result is inquisitive and informed and in a position to plan his financial future. Perhaps the government should include financial literacy as a standard syllabus subject and perhaps the individual should stop expecting that when it comes to finance they need their hand held like a baby. Perhaps I need to run mass classes on subjects like “Your Super – where is it and what are your options”.

In the end, for all its deficiencies, for the apparent lack of retribution, the Hayne commission has gone a long way, with limited time and resources, to changing the bank and insurance industry culture and has certaintly, surprisingly, highlighted some significant issues of client abuse that were to this point unearthed. They have to be congratulated for that. This is a step in the right direction. But it will still take individuals within the bank, insurance and financial planning industries to make individual decisions that change the culture. No one can force them to do that, they have to want to do it.