Beginners Education: The Anatomy of Shorting

It is not that easy to genuinely short a stock. You can do something similar through CFD accounts, but we wouldn’t recommend you deal with them, and nor would the big players, the hedge funds and the institutions.

Only some brokers offer the facility to set up a shorting account because it is generally a time consuming and riskier activity for the same commission and the retail clients that tend to want to do it are generally more demanding of time and resources require more monitoring than a good old plodder.

To short something you have to contact a broker and ask how much stock is available to borrow. They contact the back office who contact one of the big share custodians. Australian custodians hold about three trillion dollar’s worth of stock which they are generally happy to lend out to brokers for a small fee, a fee that is, of course, passed onto the client. With that much idle stock around you can short most things, although when there is a lot of action and volatility the stock that’s available to be borrowed can dry up and as usual, the smaller the stock the less the liquidity..

Once the broker tells you how much stock you can sell short you pick the amount and they’ll sell that borrowed stock for you. There is a lot more to the detail than that but that’s the bones of it.

When someone shorts a stock they do it in the belief that the share price is going to fall so they sell with the view to buying it back at a later date at a lower price, locking in a profit and returning the borrowed stock.

Of course, sometimes a stock will move in the opposite direction to the shorter’s expectations i.e. it starts going up, and you may see those same people who shorted the stock scrambling back into the market to buy back the amount of stock they shorted to limit their losses as the share price goes higher. This is called “Short covering” and is often quoted as an excuse for why a share price is flying up after a recent sell down.

The ASX monitors shorting through its business rules which require all Member Firms (brokers) to tag any trade as a short trade if it is a short trade.

The 2007 GFC caused shorting activity to run riot with some significant criticism that in an atmosphere of fear short selling was smashing share prices and undermining the integrity and confidence in the US and the global financial system. The US and Australia imposed a shorting ban in the GFC whilst they tried to stabilise the market sell off.

When they removed the shorting ban the list of stocks that were being shorted began to be published daily showing how much of a stock’s trade related to shorting. The publishing of the list followed the outcry about shorting from regulators and investors alike and met the call for more transparency.

The shorting ban and the extra transparency was not popular with a lot of fund managers – particularly “hedge fund” managers who made a business out of shorting stocks. Their annoyance makes it apparent that short selling information levels the playing field against them, which means it adds value to other investors.

ASIC now publish the list (which is in the Marcus Today newsletter on Wednesdays). It was designed “to provide better disclosure” but it is now a list that all investors and traders should keep in their peripheral vision because it highlights stocks that have an ‘issue’, are often highly traded, are often volatile and which can bounce sharply once the shorting ends.

So how can you make money out of shorting or the shorting activity of others?

Here are some basic observations:

Short selling is a bit of a distraction because it is generally a short term thing. But it is something you can also keep an eye on even as an investor, just in case one of your holdings suddenly becomes the victim. More likely than not it will be for a reason and the short-selling disclosures highlight the need for you to do your work or get out of the way.

HOW TO READ THE MOST SHORTED STOCKS TABLE

The list of short sold stocks is intriguing because it is a list of stocks that, apparently, people don’t like. When 80% of broker research is geared to telling you about the stocks they do like, often because they are paid to tell you that, it is refreshing to read a list of stocks someone doesn’t like. It is intuitively honest, where much of the research isn’t.

Here is an example of the table of the 30 most shorted stocks. The table shows the % of the stock sold short each trading day and the numbers go back 20 business days which is about a month. If the number is pink the % sold short has risen since the day before and if its gone blue it has fallen since the day before. So the colour change shows you the trend in shorting in that particular stock.

As an example, Aconex (ACX), has been progressively shorted up until the last couple of days in the example period, when the short selling finally reduced from 17.3% to 16.8%. Same thing with Myer (MYR) – it has been increasingly shorted until the last two days. So you would naturally ask…is this a buy signal? Meanwhile WSA, ORE, TFC, SYR, VOC are still being progressively shorted day by day and DMP has been increasingly short sold for 16 days on the trot. 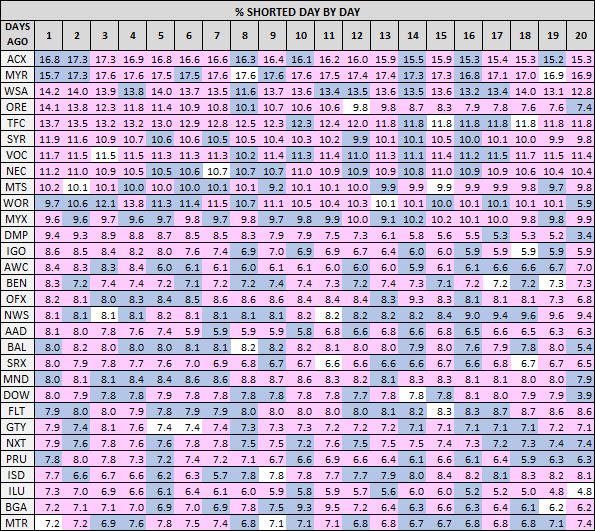 The shorted stocks list was of tremendous interest in the GFC when stocks like ABC Learning and Babcock & Brown were being targeted by shorters (for good reason), because it highlighted those stocks as vulnerable. Come another big market sell off it will become a focus again. A bear market is a bull market for shorting.

Although the list has become less useful without the momentum of the GFC behind it, what it does represent is a list of potentially good trading stocks. Almost all the stocks of the list are likely to be “stocks of interest” to traders and that interest is heightened by the short position because when they announce something positive, short covering (having to buy the stock back in a rush) can potentially accentuate a rally, and when they announce something bad, well they’ve already been shorted.

So they tend to be ‘stocks of most interest to traders’ – cyclical stocks, risky stocks, volatile stocks, stocks that trade high volumes, stocks with big ‘issues’, stocks that could move a lot on little news. Stocks that will move on the cycle, on factors that can change quickly. Many of them have become so because they have had a “Big issue” – a profit warning, a collapse, a failure, or they are stocks that are highly geared to a commodity or cycle. Investors wouldn’t touch half of them but on one small change in the trend of their negative driver they could fly. So this list is a traders delight.

Some stocks are permanently on the list because there is some institutional interest in shorting them – but that may be a long short fund with a position offset by a long position in another similar stock…it may not reflect negativity so much as relative negativity, relative to a ‘paired stock’.

The bottom line is that we suggest you could use this list to identify stocks that are likely to be more volatile on results/announcements/news. On that basis the list is quite interesting, especially if you have a positive view because any good news and they will presumably ‘rally more’. But the list is also an alarm bell for investors, because these stocks tend to be more volatile, unpredictable and therefore ‘risky’. If you are about to press BUY on what you think is a “sleep at night stock”, then just check it’s not on this list first.

When the bear market was in full flight (during the GFC) there was a lot of shorting activity. A bear market is a bull market for shorting so of course it becomes more prevalent, and when only 2% of ASX 200 stocks are up in a year (2008) there is simply no opportunity to make money in equities by just going long. So everyone wanted to know about shorting.

So here is the pocket version of shorting – in a bull market this becomes less relevant.

Targets for shorting are stocks in which you can generate fear.

That isn’t too hard in a bear market and the best targets are those companies with the following qualities:

The basic game is “Go short and then start spreading the word”.

How to combat a short attack:

Announce you have no debt issues and are not going to have a rights issue. Get some fund managers to buy the stock. Get your tame brokers to re-issue their positive reports, sorry, independent research that you paid for when you paid them that large corporate fee last year.

It ends up being a War of Words and if the company wins the rebound is fast as the short funds have to cover in the market in competition with each other.

How to make money out of shorting….

Learn how to short and learn to identify the targeted stocks.

Or…as a long only investor:

Bottom line – keep an eye on the shorting list we publish each week. If you are a long only investor watch out if your stocks appear repeatedly. If you are a shorter….jump on board and spread the bad news.

Beware buying the victims, beware catching the knife. Odds are firmly against you and when the shorters have their teeth in they rarely let go before the kill.

CLICK HERE to sign up for a free trial of the Marcus Today newsletter including our daily STRATEGY PODCAST.