This article covers Step 2 in the Capital Management process;

For traders, that often takes the form of ‘should I use a stop-loss?’, ‘where do I place my stop-loss?’ or ‘how do I manage my stop-loss?’. In the following article, I will attempt to answer those questions. The caveat, however, is that the strategies outlined below are not exhaustive – not by a long shot. There are thousands of ways to implement and manage stop-losses. It’s about finding something that is relatively simple and which works for you, and – more importantly – being consistent with the application.

There is no point chopping and changing exit strategies and expecting good outcomes. Constant change will invariably lead to the comment ‘stop-losses are useless’ or ‘no matter what I do, my trades always get stopped out just before the stock price rallies’. If you’ve ever found yourself saying these things, chances are you have never applied a stop-loss strategy consistently.

In short ‘yes’, they do. If applied consistently. A research paper published in 2008 by Kathryn M. Kaminski and Andrew W. Lo (When Do Stop-Loss Rules Stop Losses?) considered the application of a simple stop-loss strategy applied to an arbitrary portfolio strategy (i.e. buying an index) in the US market over the period from 1950 to 2004.

The strategy dictated that cash would be moved back into the stock market once the 10% fall in the stock market was recovered. The research found that when the model was invested in the stock market it gave higher return than bonds 70% of the time, and during stopped-out periods (when the model was invested in bonds), the stock market provided a higher return than bonds only 30% of the time. Over the whole 54-year period, the study found that this simple stop-loss strategy provided higher returns while at the same time limiting losses substantially. They also found that the stop-out periods were relatively evenly spread over the 54-year period they tested, showing that the stop-loss was not just triggered by a small number of large market crashes. Furthermore, if the tech wreck was excluded and that data from 1950 to December 1999 was used, the model worked even better. This was because it got back into the stock market too quickly during the technology bubble. This was most likely because the stop-loss level was set too low.

Where do I place my stop-loss?

How do I manage my stop-loss?

From the research above, we can start shaping a strategy;

With all of that in mind, below is what works for me. There are multiple elements to my strategy but they are all very basic.

Marcus talks about ATR a lot but for anyone unfamiliar an ATR measures how much a stock price will move, on average, over a specific time period. For example, a stock which is trading around 100c, might move on average, 10c per day (both up and down) over the specified time period (usually 14 days). Knowing that the stock moves 10c per day on average, there is no point putting a stop-loss at 95c. It is inviting being stopped out. A multiple of 2-3x that 10c would be more appropriate. That would put a stop-loss 20-30c away from the entry price, i.e. at 70-80c.

Let’s have a look at a real-life example. Below is a chart of Codan (CDA), with the ATR attached. 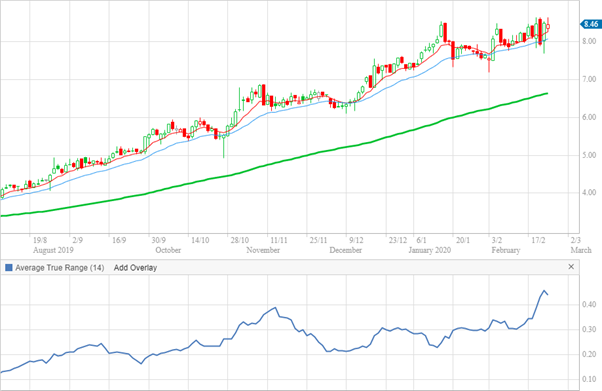 The current ATR is approximately 43c. That means the ATR range at 2-3x is 86-129c. Assuming an entry price of 846c (the current price), our preliminary stop-loss range is 717c-760c – that range is highlighted on the chart below.

The second part of the strategy involves the following;

We can see that the bottom end of the range, 717c, sits just below the swing low from early February, as well as all the other swing lows in the recent sideways consolidation zone. The stop-loss range 717-760c, represents a stop-loss 10.2-15.2% away from the entry price of 846c.

In this example, the bottom end of the range 717c, suits the conditions of being around 15% away from the initial entry price, and below all the recent swing lows. More conservative traders might consider the 700c round number as well. Putting a stop below this level would require widening the stop by another 20c and blow the distance out to 17.6% – which would not be the end of the world. 15% is a guide. In reality, 13-17% is OK.

There you have it team, a fairly simple stop-loss strategy which relies on tested research (the 15% rule from entry and trailing) and some technical considerations (support and resistance, swing lows, round numbers, etc) to increase the probability that the stop-loss will be useful in its application. It’s not all that sophisticated and I have seen many more elaborate strategies. But it works for me, is easy to apply and is based on evidence. More importantly, I apply it consistently. I don’t chop and change. I realise that sometimes it will work perfectly, and sometimes I will just get stopped out before a monster rally. So be it. If you apply this type of consistency -with any strategy – at the very least you will have a data set that you can look back over, determine its effectiveness, and then make changes accordingly. If you are going to constantly change any part of a trading strategy without understanding why, then you will get what you get.

The Importance of Education and Finding a Mentor
November 26, 2020

The Joys of Being a Trader – and Why the US Election Doesn’t Matter
October 26, 2020