Four teenagers, 4 adults and two ‘geriatrics’ in two campervans for two weeks sounds like a recipe for disaster­ but the problems came not from the travelers but from other directions. Our middle son invited us to join him and his family on a trip to New Zealand.  Our youngest son and his family joined in too.  All was carefully planned, route, overnight stops activities etc. to suit the diverse interests.  Everything looked good until the bush fires chipped in.  Our middle son is a volunteer firemen and lives in the southern highlands of NSW.  His house was directly in the path of the fires and he was busy night and day fighting the fires in the nearby townships.  He was preparing to cancel and had negotiated with Qantas and the van hire company, but two days before they were due to leave the winds dropped and a small amount of rain fell.  He was not needed by his RFS team so, at the very last minute, the family set off to join us in Christchurch.

That was the first problem.  Next their flight was delayed and the van hire company, one of the biggest in NZ, closed at 4pm.  No amount of negotiation would provide a late pick up.  Not good enough for a big international tourism company.  He and the family caught up with us next day somewhere on Arthur’s pass.  Meanwhile we had taken the plumbing apart on our van because the drainage was blocked flooding the van.  It had obviously not been serviced properly.  We were in a beautiful remote spot with no mobile coverage so it was a case of fend for yourself.  We had trouble with the drainage for the following week.  Given a bad start we were ready for almost anything but all went well.  Or almost all.

I had wanted to visit the South Island ever since spending a few days in the North Island accompanying my wife on a work trip.  I was not disappointed but I was surprised.  The South Island is magnificent.  Vast areas look and feel as though no one has ever been there before.  Whilst the mountains are small compared to the Alps they are at least as spectacular with endless walks as easy or as tough as you choose to make them.  Even after a long drought there is water everywhere.  Cascading waterfalls, powerful rivers tumbling over rocks and lakes everywhere.  And of course the glaciers.  There are some excellent remote camping  spots, but don’t expect a coffee bar, electricity or mobile phone service.  This is true wilderness.

Collecting the campervan from the vast area of parked vans you would expect to be part of a campervan procession around the Island, but once clear of the airport traffic dwindles and rarely did we follow or were followed by another campervan.  The roads are small and overtaking is not easy but it’s rarely needed.  The sparseness of the population and the number of tourists provides one of the quietest tourism areas I have ever experienced.  The only busy place we found on the whole of South Island was Queenstown.  It’s busy, lively and fun and must be one of the few places on earth where winter sports blend with summer sports in the same place.  It’s also the place for everything adventurous and dangerous.  Commercial bungie jumping was invented in a canyon nearby,  jet boats fly at frightening speed up narrow creeks in seemingly no water and the canyons provide ideal conditions for white water rafting and kayaking.

Our teenagers were keen to indulge themselves.  I joined in a white water rafting excursion which nearly didn’t happen. We were all ready to go, kitted out in wet suits, helmets and buoyancy aids when our guide discovered that we were up the creek and had no paddles.  It took a while but the paddles arrived and we were ready to go.  I was probably 30 years older than the next oldest but I had fun and did not feel out of place. If you can, why not?  It feels and looks dangerous but the organizers take great care to make sure everyone is safe.  The rafting is fun but there’s time between rapids to enjoy the spectacular gorge which included the location of the ‘Pillars of the Kings’ from the filming of “Lord of The Rings”.  New Zealand tourism has benefitted greatly from that film.  It’s the perfect location, needing little or no embellishment.  The vegetation, the rocks , the rivers are all sitting there just waiting to be filmed.

Milford Sound is remote but has the most luxurious camp site you are likely to find.  It sits next to a hotel so there’s good food and coffee ready and waiting.  A substantial kitchen, dining room and comfortable lounge are there just for the campers; social interaction with the Kea birds was a highlight for the teenagers and everyone else. 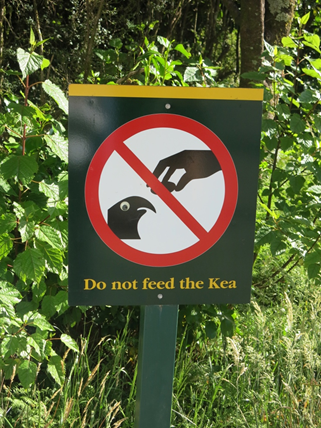 We enjoyed a cruise down Milford Sound and next day a trip to Doubtful Sound.  Both are Fiords connected to the open sea.  Doubtful sound is even more remote than Milford and I joined the teenagers in a kayaking trip whilst my wife and a daughter in law took a cruise.  I made one mistake.  I had protected myself daily from the notorious sand flies using the cream provided in the Milford Sound camp site and had not been bitten.  Doubtful Sound required an early rise and I wasn’t quite awake.  As I began to change into a wet suit the sand flies struck.  I had deterrent but I couldn’t get it on fast enough.  I suffered for the rest of the next week.

After our poor start we had a great time.  I would recommend it to anyone who enjoys a wild open environment.  It’s not cheap, particularly the activities in Queenstown, but if you enjoy walking and don’t need a guide you can go all day and not spend a cent.  There’s no language problem (or not much).  They drive on the same side of the road and you don’t need a visa.  My only regret is that we had two vans not three.  Six people in a campervan, even a big one, is two too many.

The one thing we never thought about was the prospect of not being able to get back.  We had great weather, but had we been in Milford Sound or Doubtful Sound a week later we would probably have been stuck there for an extended stay.  Both are served by single roads with no alternative and both were blocked by flood water.  A big piece of the road to Milford Sound has been carried away in a landslide.  Sometimes the gods are with you and we flew out of Christchurch oblivious to the problems which we might have faced.