In fact, we had spent some time deliberating on the APT (ASX: APT) question. Here from the 20th February:

We were writing about the risks to the market of serious disappointment and the pillars of the ASX200 record rise being in question.

Events have largely overtaken us and the last month has been bloody beyond anything we could have imagined or planned for.

But one stock that really worried us was Afterpay (ASX: APT). We called it the Albert Jacka of the market. A hero stock. Look him up, first Australian VC. 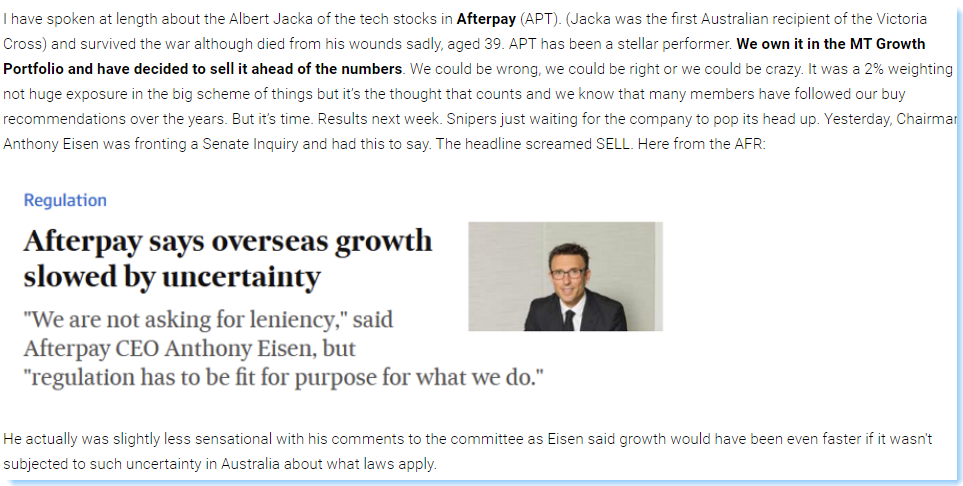 We went on to say that if that was not a signal to sell what is?

We called APT (ASX: APT) a sell before it announced its numbers. Not because we knew that Coronavirus would take out their key demographic from buying, or that bad debts would rise but more because at a $11bn valuation it just looked too toppy and given the evidence of other high growth high PE stocks, it would be wise to sell first and ask questions later.

We did. We backed up this recommendation again on February 25th. In fact, not just of APT (ASX: APT) but others too. We even warned that this CV19 was going to be a ‘thing’.

We sold our holdings in APT in the Portfolios and clients also sold. They have dodged a bullet. It is unfortunately one of many bullets around, some of which have not been easy to dodge at all.

Coronavirus has become the thing we feared, and events have taken a dramatic turn.

Throughout this extreme downside move, we have remained heavily weighted in cash across all portfolios.We have refrained from trying to time a short-term bounce. We have de-risked where we can and sold into rallies. We remain cashed up. This is the opportunity of the decade. The big question is when to pull the trigger.

At Marcus Today, we have over a century of experience and we are a small team. We have never seen the like of this before. Never. Relying on the past playbook could be fraught with danger. It really is different this time. BUT we have a strategy. We have stuck to it and remained a voice of calm and hopefully rational thought throughout this crisis.

We have been around a long time and know how to survive and take advantage of these unique conditions. If we get it right, we can set up our clients and subscribers for a stunning bounce back.

We believe that having large cash holdings allows us to stand back objectively and make that call when it comes.

We want you with us when it does. It will change your life. Much like CV19 will do, so too will being a subscriber of Marcustoday.

Good luck. Wash your hands and panicking is not a great strategy.

Don’t get caught flat-footed coming out of reporting season: 10 Stocks on the Move
September 8, 2020

In the Boardroom with Peter Harold of Poseidon Nickel
August 15, 2020

Spring clean your investments with our September stock picks.