Where do we even begin…

We are witnessing history. Both in the stock market and the broader world. Countries in lockdown. Fines for leaving the house without a good reason. Cafes, restaurants, bars, clubs and pubs all closed. Sport on hold. And that’s not even the half of it. Completely unprecedented times. In this historic moment of uncertainty stock selection takes a backseat to asset allocation. It is all about whether you are in the market or in cash. As is the case with the Growth SMA, it is bittersweet outperformance. The Equity Income SMA’s performance would have been better if it weren’t for an overweight position in the banks through February.

Similarly to the Growth SMA, the cash weighting in the Equity Income SMA fell from 67% on March 23rd to 5% on March 25th.

THE MONTH THAT WAS

The chaos took its toll on the world’s markets in March. Since peaking in late February, the All Ordinaries Index fell 30% – and it would be worse if it wasn’t for the 15% rally we saw in the last week of the month. The energy sector was the worst hit, down 52% after falling as much as 59% as the price war between Russia and Saudi Arabia added to the woes.

Although we have just seen a bounce, there was no market immune from the carnage. The Italian and Spanish markets have been the worst hit, down 33% a piece, while the Dow Jones has dropped 26%, the S&P 500 24% and the NASDAQ 22%. 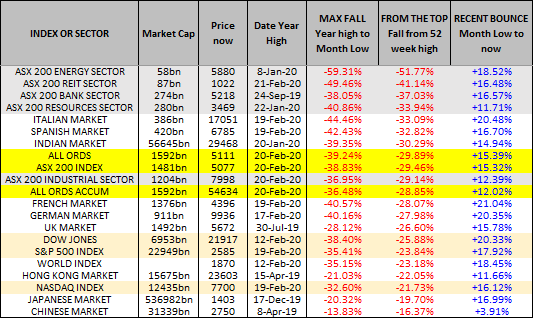 *Marcus Today | 09/03/2020 | Details correct at time of publication. Past performance is not a reliable indicator of future returns.

France Italy and Spain are all seeing the trend of deaths slowing down – a “Light at the End of the Tunnel” – some countries are talking about lockdown ending at the end of April. The horrible headlines continue but we are getting numb to them because we all know the stock market is going to anticipate the top of the virus spread and regain some confidence well in advance of the actual case number top. There does appear to be an end in sight at this point. Australia is outperforming much of the world with a flattening case curve. If international investors were worried about which countries to be underweight, Australia is not one. Plus, if the virus is contained sooner rather than later, and economic growth expectations improve, the A$ will rise giving international investors in our market “double bubble” – the benefit of rising stocks and a rising currency.

After weeks of negative news, we saw a positive oil headline last week. Trump is trying to broker a truce in the Saudi Russia oil price war and who knows, it may just happen.

The oil price was up 24% on Thursday in the US and up another 15% Friday. OPEC have called an OPEC+ Emergency meeting, everyone seems to be coming on board, Russia, Canada, Brazil, the US. If the war ends the sector will still be under a coronavirus cloud and become a barometer of virus sentiment – it will outperform in the recovery and underperform if it turns for the worse.

With our current (optimistic) stance that absent “negative shock” the market may have seen the worst, we’d be happy to stay overweight the sector even after this ‘pop’. There may be some smoke and mirrors, but whatever the embellishment there seems to be some progress. There was always this risk that the OPEC Russia stand-off ended abruptly and we saw the oil price spike.

We have seen enormous levels of volatility. Our local market has seen numerous intraday moves of 300+ points. The Dow Jones moved an average of 1,429 points daily over the last two weeks of march. Historically the usual trading range is between 80 to 150 points with the occasional spike to over 600 points in a correction. It only got to 680 points in the GFC. At the current level of the Dow Jones 1,429 points represents a 6.7% range a day. Unheard of. You have to assume there is some technology change between 2008 and today explains it, perhaps the robots really have taken over the asylum.

However, for the moment it appears volatility has peaked. It’s still a long way from normal, but it’s settling and that is a good sign. Other features of March:

Much of our strategy discussion in the last couple of weeks has surrounded the banks and oil.

The banks have their results soon. They are going to announce a big increase in provisions and may even go overboard which gives them a big cushion to add back in later results – but for now, results are going to be messy. Dividends will likely be cut. They may even suspend them. The question is whether the fall in the stocks already discounts that. Hard to know. We have hedged our bets with market weightings in both SMA’s – it’s called ‘neutral’ weightings in the fund management world.

With our current (optimistic) stance that absent “negative shock” the market may have seen the worst, we’re happy to stay overweight the oil sector even after this ‘pop’. The oil price will become like the A$, and commodity prices in general, a barometer of economic sentiment. Without the oil price war the sector will start to reflect the economic sentiment which is being driven by the pandemic sentiment. So, the energy sector will become a geared CV-19 sentiment proxy.

We have had over 130 All Ords companies make CV-19 related announcements of which over 100 included withdrawn guidance and distributions. That’s since February 20. There is no way those companies have been able to assess the actual CV-19 damage – those announcements were extremely premature. There are a lot more fundamental admissions to come, from the same companies as well as other companies that haven’t said a thing yet. Its like the results season, you can get blown up in individual stocks at any moment. It’s a dangerous time. More so than usual. There is so much damage being done on a corporate level, but so little specific feedback yet. It’s coming and it won’t be good.

We know our current asset allocation (93% invested) could be wrong, of course it could, but we are utterly prepared to go to 100% cash again if we need to. The best you can do in this uncertainty is to wake up every morning and make decisions. There is no playbook for this.

There is enough technical evidence to suggest that if the newsflow doesn’t ‘shock’ and the current virus conditions persist, which includes the assumption of the curve flattening in the US, UK and not resurging in China, then the market should continue to quietly regain confidence and lose its volatility.

As we settle down stock picking becomes more important and our focus.

The best-case scenario now is that we all get bored. If we do, if we get numb to coronavirus cases, if we get numb to the economic damage, the markets might just hold on to this rally, the volatility might die down, and stock market confidence might slowly seep back in as we quietly move through the virus timeline to the other side.

Even better scenario – A vaccine. Drugs to alleviate symptoms that reduce morbidity rates.