The COVID-19 pandemic and subsequent market volatility have seen scores of Australians jump into the stock market in recent weeks, enticed by the opportunity no doubt. ASIC reported a record number of new trading accounts since March, when the market bottomed. An average of 4,675 new accounts a day were opened between 24 February and 3 April. 3.4 times that of the prior 6-month period.

The Marcus Today team is often asked ‘if we could only buy one stock’ or ‘what stock should I buy first’, what would it be? Typically, the answer comes back, Macquarie Group (ASX: MQG). It has been a favourite of the team for some time. Perhaps it’s because Henry used to work there and we love him so much that we also love Macquarie.

At the start of the pandemic, Chris was on Ausbiz talking saying that if there was one stock he would want to own through COVID-19, it would be MQG. The reason for that? Because the Macqaurie team flat out know how to make money… in any market conditions. They have a proven track record of finding a way to make money, and lots of it.

MQG is one of the best run businesses in the country. They have the ‘smartest people in the room’ working for them and their pivot away from traditional investment banking to asset management over the past decade has been both revolutionary and ridiculously lucrative.

We last covered MQG back in May last year and a lot has changed since then. Results in early May pleased the market with the stock up 5.7% on the day. Net profit of $2.731bn versus $2.99bn last year was down around 8%. It was not unexpected however, as the bank had given guidance that it would be weaker. After sifting through impairment charges, dividend decisions and conservative looking forward statements, a picture of a well-placed business emerges. When other banks are deferring dividends, MQG stands out for maintaining a yield.

The big news at the moment (i.e the past couple of days) is the momentum in the banking sector. What happened and what do we do about it? While MQG is materially different from the high street banks, it does benefit from the same themes that are buoying the others and it is arguably more leveraged to an economic recovery.

The banks, including MQG, took a cautious approach to COVID-19, positioning themselves accordingly. What has changed, is that the economy is opening up sooner than anticipated and performing better than feared. The medical reality of COVID has not been as bad (thankfully) as anticipated. Brokers are updating GDP forecasts and models for bank earnings are factoring in more optimistic assumptions. 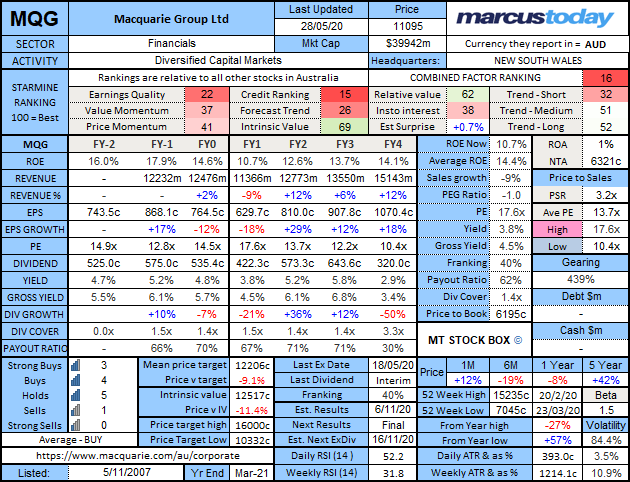 WHAT SORT OF INVESTMENT IS MQG?

Macquarie is the definition of a blue-chip stock. Well diversified and high-quality earnings. Strong management. A very strong balance sheet and adaptability are what make it attractive. You also get a 4.5% yield for holding it. The bank is also well positioned to deal with current market disruption. MQG benefited heavily from the first quarter capital-raising spree, completing $4.4bn worth of deals. Raising money for NAB, Newcrest, Oil Search and Flight Centre. M&A tailwinds are also expected to flow out of COVID-19 disruption. Its capital markets division contributes ~14% of earnings.

As the largest manager of infrastructure assets globally a low interest rate environment is also likely to be supportive of its infrastructure and real estate asset management business, which contributes ~40% of earnings. Infrastructure spending and renewable energy investment are expected to lift materially across all of MQGs geographies in the coming years, as governments around the world look to stimulate damaged economies. Our Own RBA Governor Phillip Lowe earlier this week reaffirmed that point, stressing the importance of infrastructure spending to a Senate committee on COVID-19.

Full-year results were in line with expectations from UBS, the broker saw MQG well positioned to take advantage of investment opportunities in the current downturn. The bank has a record surplus capital of $7.1bn at its disposal. Morgans and Ord Minnett mirrored sentiment from UBS, both considering the business well placed to ride out the current storm. Credit Suisse, the bear of the group pointed to some short-term headwinds. Morgan Stanley believed the focus on impairments in its FY results overlooked impressive numbers from the bank’s asset management arm.

MQG fell 53% in 22-days during the market sell-off. It has since bounced 54% from its March 23rd Low and is currently 34% off its February high of 15177c. RSI has lifted steadily since the low but has not yet crossed into overbought territory. Momentum of the uptrend appears to have bottomed in the short term. 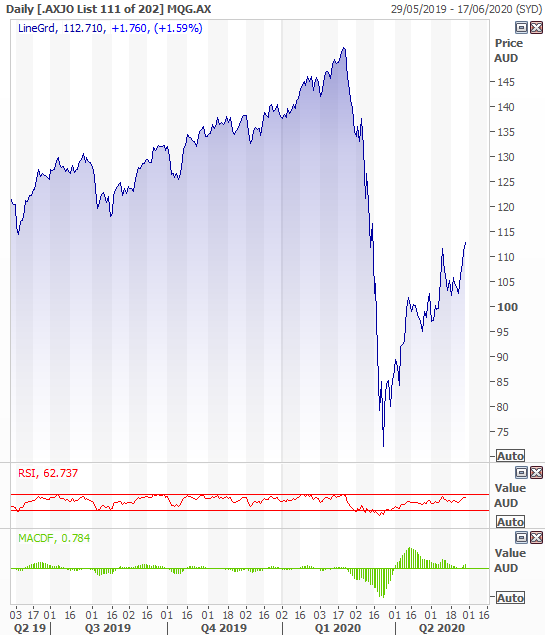 After sorting by latest filing date no real pattern emerges. Some of the major players making minor adjustments or holing their positions steady. 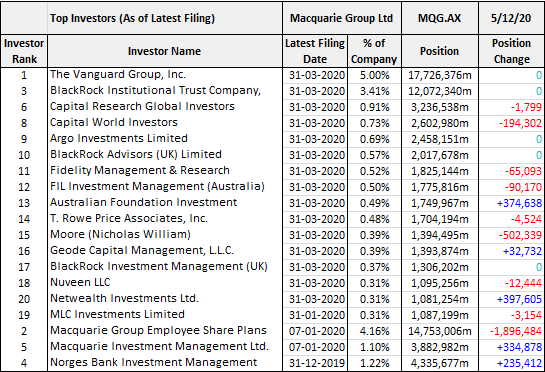 Short interest is extremely low, as expected for a very high-quality company. At 0.47%, it is clear that not many people are betting against MQG. 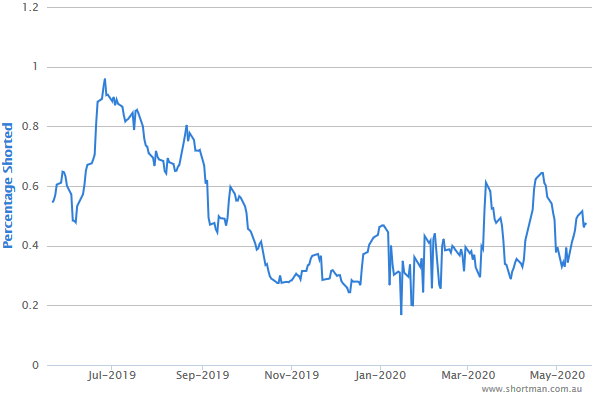 Despite what a lot of articles may tell you, it is not too late to buy into the market. Sure, some of the easy money has already been made but there is still plenty of upside to be enjoyed. MQG is leveraged to the economic recovery and positioned to take advantage of market disruption. A strong short term-technical picture, positive broker commentary and an improving macro backdrop are some of the many reasons we love the stock. We hold MQG in the MT Growth and Top 50 portfolios. Accumulating around the 10500c support level would be ideal… if given the opportunity to do so. BUY.