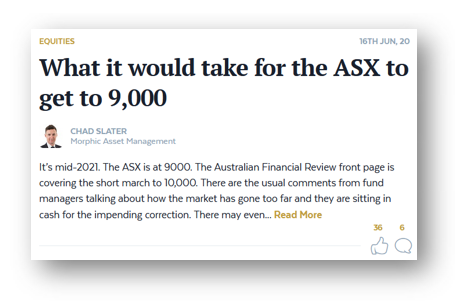 A Livewire article that captured my interest. Chad Slater from Morphic Asset Management talking about visualisation – he starts with this: "Back in high school, lacking both high levels of coordination and physical size, I ended up picking cross country and middle-distance running as my sports. One of the coaches was particularly keen on "visualisation" as a technique ahead of races. Visualisation is a well-known sports psychology technique, where you think about how you'd feel at certain point, visualise your race in your head in advance; thinking through each part of it; living it in your "mind's eye." Over the years in my investing career I've found this technique particularly useful around big exogenous events, where it's easy to become part of the narrative and not see other paths. The starting point is to think of yourself talking to a friend in a year's time about an event you currently think is implausible. Importantly, try to think of what some of the pre-conditions that would be needed for that event to come true, which of course with humans' hindsight bias, would be "obvious".

What would we have to consider to visualise 900. Now we're talking…

Thanks again for the article Mr Slater.