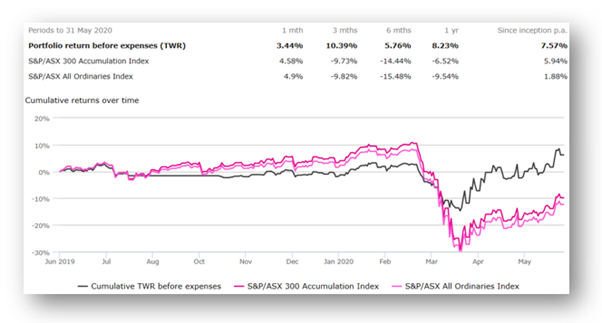 We continue to be Overweight ‘recovery’ sectors (Sectors that give us the best exposure to an improvement in the coronavirus pandemic) and in particular the Energy sector which has been the worst performing sector since the top of the market, and the Travel sector as the market anticipates domestic and international border restrictions being lifted in time.

We have a focus on technology which is a thriving growth sector despite only being 3.7% of the All Ordinaries index. It’s a sentiment-driven sector so we are always on watch. But long term this sector contains a lot of growth opportunity. We have seen how quickly things can move and we have done very well in the last couple of months out of stocks like APT, EML and XRO. The sector will be vulnerable if the market tips over again.

We are back to Neutral on the Banks after having been underweight before they began their sharp rise. A short-term sentiment rally has started and we have exposed ourselves to that. Long term, we have little interest in this low/no growth sector. It is not a natural holding for a growth-focused investor. More of an income fund appropriate sector but we are prepared to hold it short term for a sentiment recovery trade.

We are slightly underweight healthcare for the moment (CSL) but we expect to be overweight in the longer term when the recovery rally peters out and we return to a steady bull market.

We are staying fully invested for now, with no need to be changing our asset allocation in the current uptrend. Since the beginning of June the Growth SMA is up another 5.36% as we write. We are watching and preparing should we need to make the switch out of recovery stocks into more defensive sectors. The trend is your friend until it ends but it hasn’t ended yet. 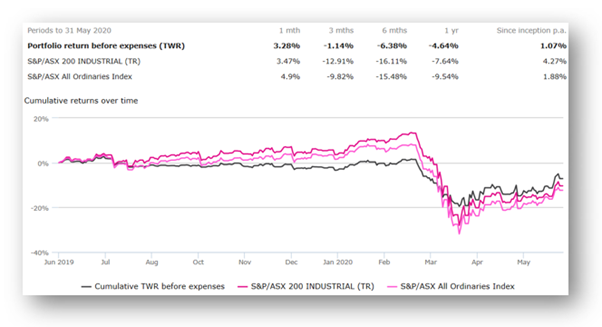 The rolling gross yield on the Marcus Today Income SMA over the last 12 months was 5.09%.

We have turned our attention to total return while dividend uncertainty plagues the market. As such we are also overweight recovery sectors, with REITs our major play, supported by some Energy and Travel exposure.

We are overweight banks, having added to our market-weight position as they bottomed. With a long-term income-focused investment, the last couple of weeks has told us that the banks are not dead forever, that there is life in the sector yet. In which case this could prove to be a once in a decade buying opportunity for income. Especially if their dividends come back.

We are still on the hunt for income. It should become easier when the economic picture clears up and we find out the real damage as we push through reporting season.

MAY AT A GLANCE 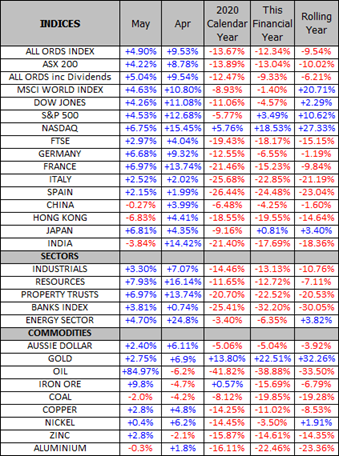 The disparity in performance between the US and Australian markets can be put down to the performance of one large US sector – Technology. Technology accounts for 25% of the S&P 500 index.

Some tech companies have seen an earnings boom in the lockdowns. Share prices have come back with a vengeance since the sector fell 32.6% through February and March. Many companies are now breaking fresh highs. The tech “bubble” is reinflating quickly with good reason. Some companies (Amazon, Netflix) have seen a boom in business thanks to lockdowns, a boom that will show up in the 2nd Q results season starting in July.

With the sector making up a whopping 48% of the NASDAQ it’s no wonder we are seeing that particular index close to all-time highs again, while the S&P 500 (25% tech) and the Dow Jones (18% tech) lag behind.

Locally the tech sector makes up just 3.7% of the Australian market but it is on the rise as the market caps of the likes of ALU, APT, APX, REA, WTC, XRO, Z1P and many others continue their rapid growth.

WHAT’S UP WITH THE BANKS?

The banks took off this month on the back of the government’s more optimistic economic outlook as outlined by Scott Morrison mid-month and based on the Josh Frydenberg revelation that the Jobkeeper program had been based on erroneous medical advice and would end early and cost $60bn less than expected. We are coming out of lockdowns three months earlier than the original over-cautious (but in hindsight very prudent) medical advice that forecast we would be in lockdowns until September. The government and the banks took that on board, provided accordingly, and look to have over-done it. The medical advice is being revised and economic forecasts with it.

The reason the banks took off this month (up 18% in four days) was the perception that they have over-provided for bad loans, the economic recovery is going to be more V-Shaped than expected and that they will be able to add back provisions in future results, flattered earnings numbers. In which the case current earnings forecasts are too low. The super-bull case suggests that they could possibly even reinstate their deferred dividends and the market began to imagine what would happen if they suddenly paid them. If there was no dividend dip. The sector would take off again.

Sentiment was also helped by a huge response to the NAB’s SPP capital raise which was upped from $500m to $1.25bn meaning their new CEO has raised $4.25bn that they may not have needed. The other banks didn’t raise capital but did take provisions. A number of brokers upgraded GDP forecasts this month and some (UBS and Morgan Stanley) turned positive on the banks having been sellers. There are more earnings upgrades on the way from other brokers no doubt as they play catch up on the story.

The long-term outlook (zero rates, tiny margins) is for a very low growth/no growth sector, but there may be a sentiment recovery – a recovery trade, to be had.

Despite moving off the front page, the virus is still the biggest risk to our market and there are no guarantees that we won’t see a “second wave” which could slow the lifting of lockdown restrictions, lengthen the recovery phase and cause a re-assessment of the economic optimism washing through the equity market at the moment. The market has spent the month celebrating the acceleration of recovery expectations in Australia but it cannot be taken for granted.

The US and UK have only recently lifted restrictions and we have yet to see if that causes a relapse. It will take a couple of weeks on the London Underground and the New York Subway for cases to flare up again. We are in that zone.

It is too early to worry about a relapse (before it happens) but a look at the chart below from the Financial Times sees case numbers on the rise in a number of countries. Poorer nations with less hygiene, less testing, less tracking and less healthcare resources, like Brazil and Africa, will be much slower to get on top of things. Brazil has just taken over the US on daily cases. We’re not out of this yet. 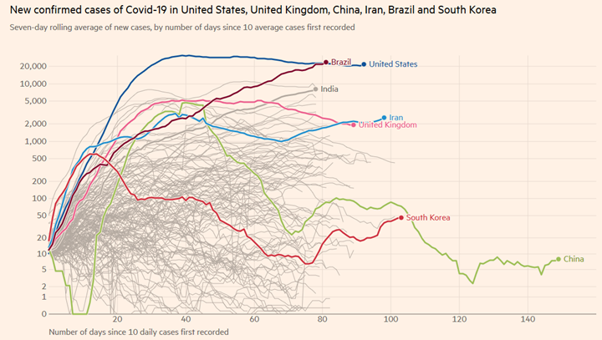 Hong Kong was in the spotlight in May after China by-passed Hong Kong legislature to impose its own national security. The “One Country Two Systems” policy continues to decay and it has played havoc on the Hang Seng. The newswires suggest the US may reconsider Hong Kong’s ‘special’ trade status – ultimately that would play into China’s hand, take Hong Kong’s privileges away and ultimately it becomes China anyway. There is also the risk of ‘capital flight’ which could end its status as the financial hub of Asia.

There are 100,000 Australians and 600 Australian businesses in Hong Kong. Continued disruption will affect share prices of companies doing business in Hong Kong. Major industry links seem to be Education, Wine, Financial Services, Jewellery, Gold, Food products. Few specific Australian listed stocks appear to have an issue, but after the protests last year, most of the damage has probably already been done.

Other features of May: