Please note this article contains general advice only and does not take into account your personal circumstances. Any discussion of past performance is not to be considered a reliable indicator of future performance.

It has a network of 37 fulfillers across 10 countries and 41 locations, and it fulfils products close to customers, keeping shipping timelines and costs competitive. In FY20, fulfilment capacity was added in Europe, Canada and the United States. The US accounts for almost 70% of its revenue.

I had even used the website before without realising, purchasing several wall prints as birthday gifts for friends. From memory, it was seamless and simple to use. Also slightly addictive, in the same way Instagram and Facebook are. You just keep on scrolling past designs you like and before too long, it has been an hour. But that could just be a millennial thing.

An obvious example of a company that has benefited from the shift to online retail and the work from home transformation. In March, there was a modest slowdown in sales as consumer uncertainty took hold, but sales bounced back in April as people began self-isolating at home and turning to online shopping and discovery.

Full-year results pleased the market with the stock up 2.3% on the day, despite reporting a loss of $8.8m vs consensus -$1.9m. Revenue was up 36% to $416m. Adjusted EBITDA was up 141% to $15.3m vs consensus $10.2m. Operating expenses for the year were $79.3m, including a one-off $2.2m provision for restructuring announced back in June. Cost savings of $5.6m per year are expected to flow from the changes. 6.8 million unique customers, up 30% vs year ago with repeat sales accounting for 40% of marketplace revenue.

FY21 has started strongly with July marketplace revenue growth of 132% and similar sales levels in the first two weeks of August. Founder and interim chief executive Martin Hosking observing the crisis has been beneficial for players with a good online presence. Hosking is also no novice at navigating black swan events, having listed his former business, LookSmart, at the height of the dotcom boom and successfully managing RBL through the GFC before it listed in 2016. 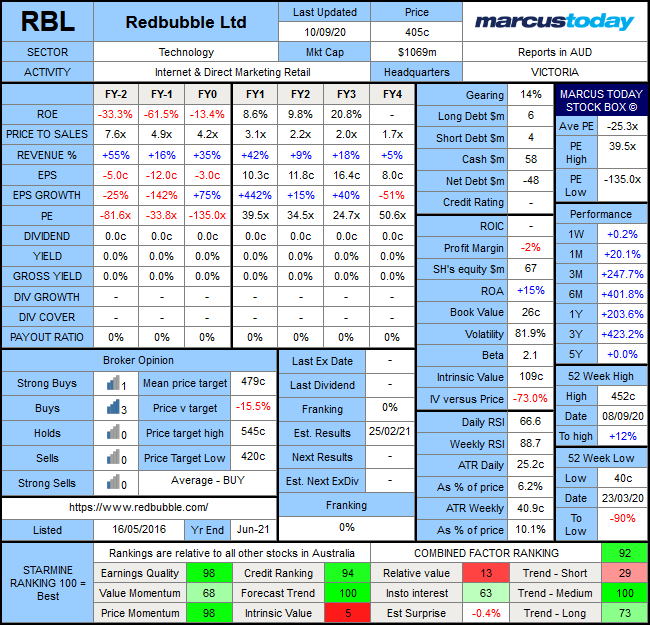 WHAT SORT OF INVESTMENT IS RBL?

Redbubble is a growth business, capitalising on the opportunity presented by the systematic shift to online activity and increasing adoption of e-commerce platforms. The combination of on-demand technology and user-generated content has helped scale the business. Sales have tripled since IPO in 2016, with margin upside, operating leverage and positive EBITDA the spoils. Manufacturing on-demand also removes overstocking risk, inventory costs and cuts lead times. Competition between fulfillers keeps costs low. Environmental Sustainability benefits flowing as well. RBL also has a natural currency hedge in its core geographies as receipts from sales and costs are all in the same currency.

Looking ahead, RBL is aiming to enhance its user acquisition and customer loyalty which is already robust, build on product offerings, and fulfilment network expansion, to take advantage of customers seeking more value within tight discretionary spending.

Morgan Stanley with the most relevant (only) update. Upgraded to ADD from reduce, bypassing a hold recommendation. Cites impressive momentum, accelerating on what was an already a notable fourth quarter. The low capital-intensive business model, transition to online and isolation friendly products positioning RBL well. Target price was increased 700% to 433c from 54c, implying 3% upside to the current share price.

Observations: RBL is up an incredible 913% since its March low and 6% since its full-year results. The selloff in the last few sessions has seen it come off its highs, losing ~10% over the week. There appears to be a small amount of support at the 380c level. RSI has just moved back from overbought territory. The stock has run hot and just looks like it might be topping out in the short term. 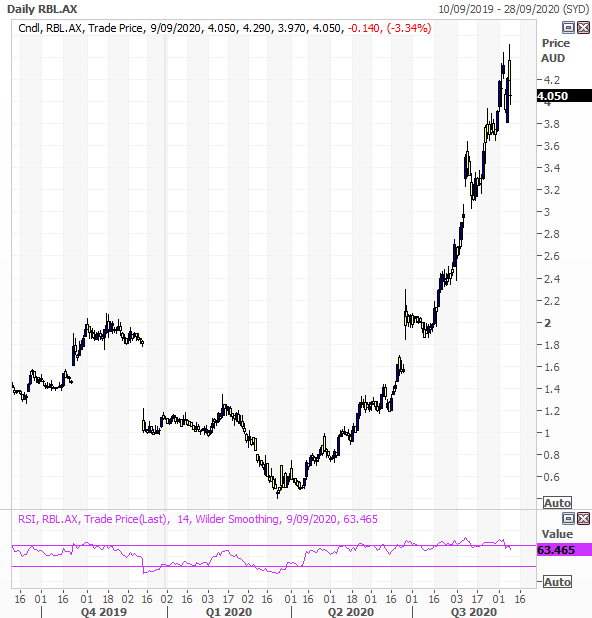 Several large purchases towards the middle of the year, HMI Capital, who sub-underwrote the OML capital raising (last week’s BUY HOLD SELL) notably picking up more than 60m shares in April. More recently, Vanguard doubled their holding, adding ~15m in mid-august. You don’t have to add up all the numbers to know there are a lot more buyers than sellers. 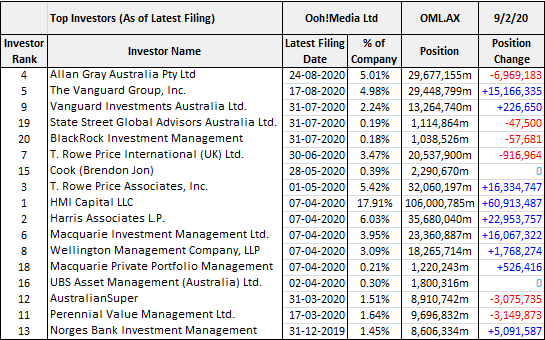 Zero percent shorted. The variance, while still at a negligent amount is interesting. A few short-lived spikes through the last 12-months. Never going past 0.5%. Not something to be concerned with. 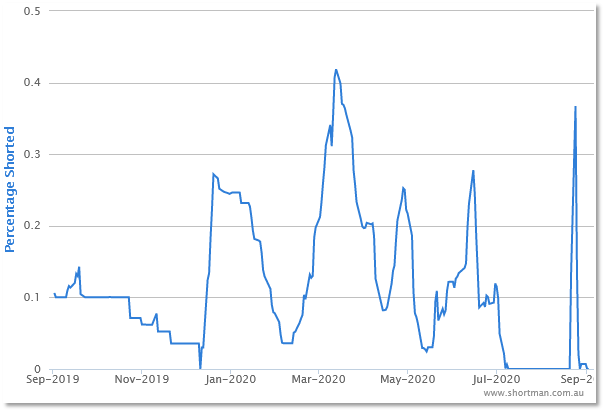 There are many things going right for Redbubble; the disruption caused by the pandemic has been a boon for sales, which has continued into FY21. For a relatively young company, fundamentals are impressive and expected to improve even further over the next few years. Positive results reaction. I am a personal fan of the business model that has given more power to the consumer and designer. Made to order with customisation attaches more meaning to products and increases sustainability. A high level of recurring revenue one of the by-products. Validation by its major shareholders adds a layer of comfort to the picture. Brokers bullish as well. I also have a small inclination that it would look attractive as an acquisition target. Price is the only issue (apologies for sounding like a broken record). With the share price coming off recent highs, and after a stellar performance since April, how much more enthusiasm do the bulls have? A macro catalyst in the form of US stimulus would likely see the stock find support at higher levels in the short term but that is still uncertain. I am convinced by the longer-term story and would be happy adding a small weight to a growth portfolio with a 12-month outlook.