Our technology index is down ~5% since September 4. The Nasdaq is down ~9.5% over the same period. The high-flying tech sector has been brought back down to earth, the ‘waaax’ wings have melted and the froth has been blown off the top (somewhat). While the recovery theme is still largely at play, valuations here and in the US have been implying unrealistic amounts of growth. Monetary and fiscal policy efforts have inflated prices and the herd has been spooked. That was the story two weeks ago. For those on the side-lines, salivating at the discounted prices and for others with some red in their trading accounts, there are still unanswered questions about whether to stay or go. Let’s try and unravel a few.

As of this week, our tech index has printed a technical bottom. The move characterised by several encouraging candlestick patterns; Monday was the bottom and despite the index finishing lower, the real story was in the fight back from the bulls. This was emphasised Tuesday as buyers flew out of the gates, lethargy only creping in slightly at the end of the day. Wednesday’s move the most convincing. The day characterised by a Marubozu candle, indicating the index traded strongly in one direction throughout the session and closed around its highs. (Last three candles in the chart). 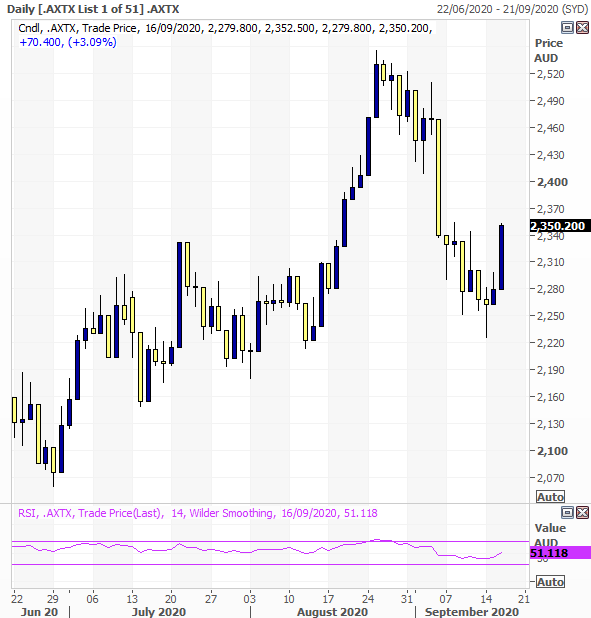 RSI has also ticked up off the bottom and is moving up through the middle of the range. For the short-term traders amongst us, Monday was the day to get back in. Hindsight is always great, isn’t it? The main takeaway here is that the technical tide is moving back in the ‘risk-on’ direction. Volatility in the US and back home is also dissipating, helping sentiment. Sentiment being the key, as we talked about last week, as this was very much a sell-off devoid of fundamental and macro influence. Making it a far less risky event to time. You just have to identify when sentiment has turned and pick the companies with the best overall picture. One of our mantras at Marcus Today is never try and pick the top or bottom, wait for the evidence and decide accordingly.

CEO Richard White offloaded ~350k last Wednesday along with the company’s largest shareholder, Realwise Holdings, which sold down 14.4m shares. White beneficially owns 139.4m shares following the transaction. Balancing out the moves, Pinnacle added 3.8m shares to its holding, however, significantly more sales than purchases after September 4 does not convey a large amount of confidence. Brokers mostly bearish; average broker target 11% below the current share price. The stock is up 34% since results on the 19th of August, currently 6% off its post results high with consolidation around the 2750c level. 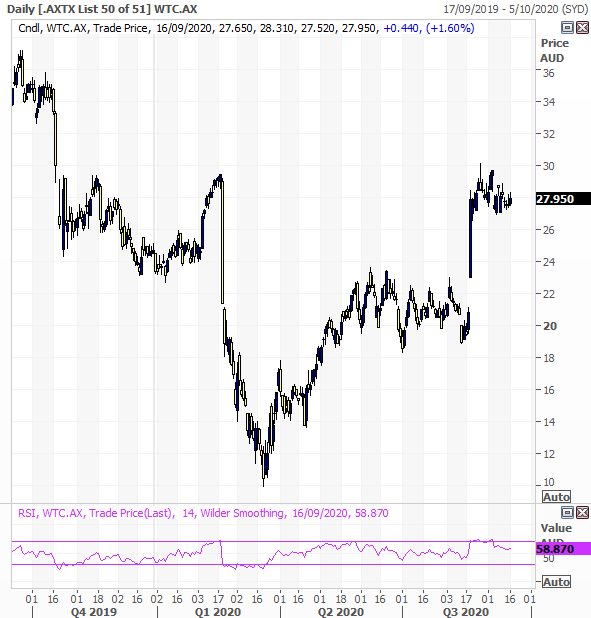 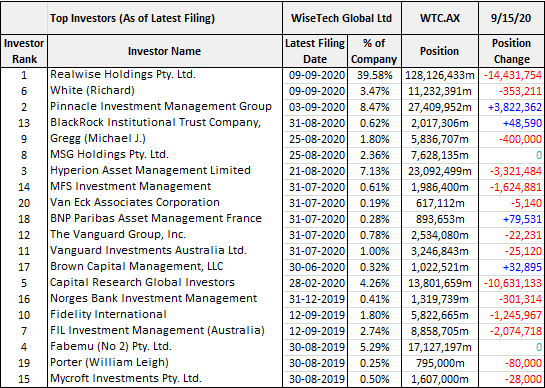 Share sales from its top investors last Wednesday were balanced out by purchases. No director sales a positive, especially given the concerns relating to PayPal’s move into the space. Brokers more optimistic than pessimistic, although most are yet to adjust their recommendations following PayPal competition announcement. Citi observes the impact is lessened by Afterpay having a large consumer and merchant network. US website visits recorded only a 1% lift over the month of August. Competition from names like PayPal anticipated to weigh on APT’s US user growth and gross profit margins. “The key concern is also the price point for merchants, [PayPal] looks to undercut Afterpay’s average margin of 4 per cent by a full 1 per cent,” according to Watermark Funds analyst, Harry Dudley. To combat that, APT would have to onboard significantly more customers at a much higher rate than it is doing currently.

On Wednesday we also heard of another entrant to the BNPL space, Zebit, which is looking to raise $42.9m at $2 a share, implying a market capitalisation of $185.7m. NAB also jumping in the space with a zero -interest rate credit card. Competition is good for consumers, not so great for margins. BNPL virtual conference next week which includes presentations from Z1P, SZL, OPY and FXL. Henry will have all the details from that.

There is also some new this morning, APT tech fund is eyeing off China with its first move into BNPL there. AP Ventures invested $13.6m for a 20% stake in the Shanghai-based start-up firm Happay, APT has a 40% stake in the fund. Activity in China is encouraging given Tencent’s interest in the company earlier in the year.

APT faded after results on the 27th of August and has slumped 14% since the PayPal announcement. On a short-term time frame, the stock has printed a convincing bottom, with 7400c the significant level. RSI has just ticked up as well. There is potential for further upside, however, the headwinds do appear to be growing stronger. Competition is heating up and the fiscal cliff or brick wall as Marcus coined earlier in the week is fast approaching. With government stimulus set to ease, the impact on discretionary spending is likely to be widespread. In the US, there has also been little progress on the fiscal stimulus stalemate which isn’t helping either. 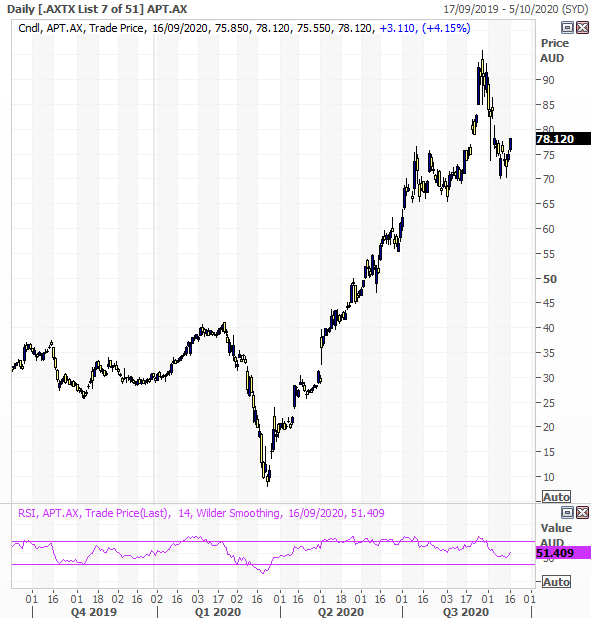 We wrote a full Buy Hold Sell on APT back in May, 2020. Which you can read HERE

The stock is down 25% since results on August 27 and 6.8% since last Friday. RSI has just started to show some signs of life with the stock consolidating around the 3200c level. It would be too early to call the bottom on APX with short-term resistance at 3300c yet to be breached. 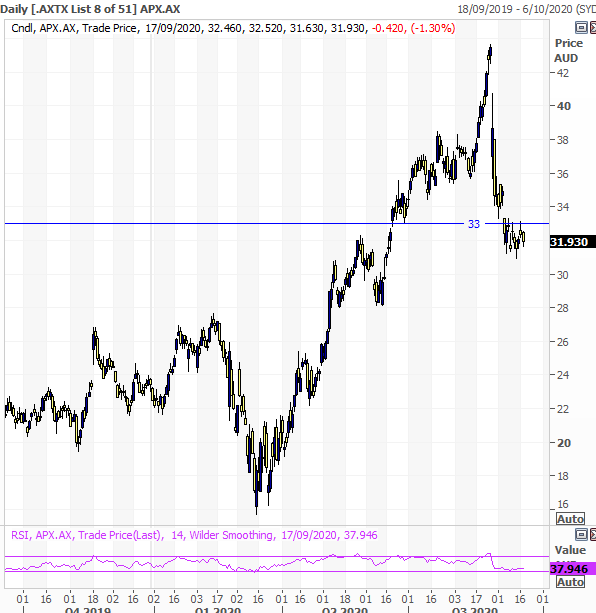 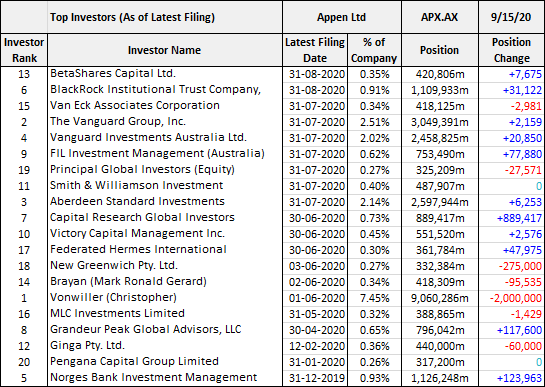 Vanguard picked up ~3.5m shares last Wednesday. No director sales. Brokers consider the company fairly valued at current levels. Unfortunately, no updates since results last month which were ahead of expectations. Improved margins on in-line revenue the highlight.

The stock is down 7.5% since results and 5.7% since last Friday. There is a fair amount of consolidation around the 3400c level, although the bulls were able to break through that yesterday. RSI ticking up as well. Interesting to point out the strong trading range between 3200c and 3800c which has been in play since May. 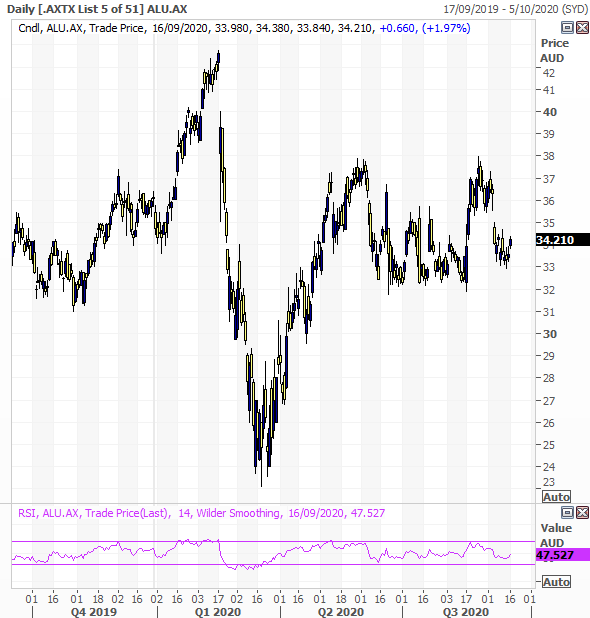 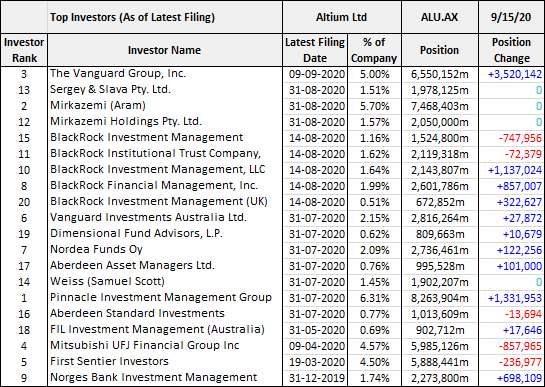 Interesting to see 3m shares sold the day before the tech selloff, very good timing. UBS maintaining a SELL recommendation despite lifting its target price and observing XRO’s customer satisfaction was ahead of its competitors. Business closures expected to be skewed by COVID, not good for revenues. No details provided on the likely impact to earnings however. Macquarie notes cloud penetration remains well below 20% in most regions outside of Australasia and sees a large opportunity for growth in overseas markets. Target prices suggesting no upside to the current share price.

The stock is up 4% since its August trading update, down 7% since Friday. Too early to call the bottom on this one. A lot of consolidation around the 9300c mark. Little upside implied. 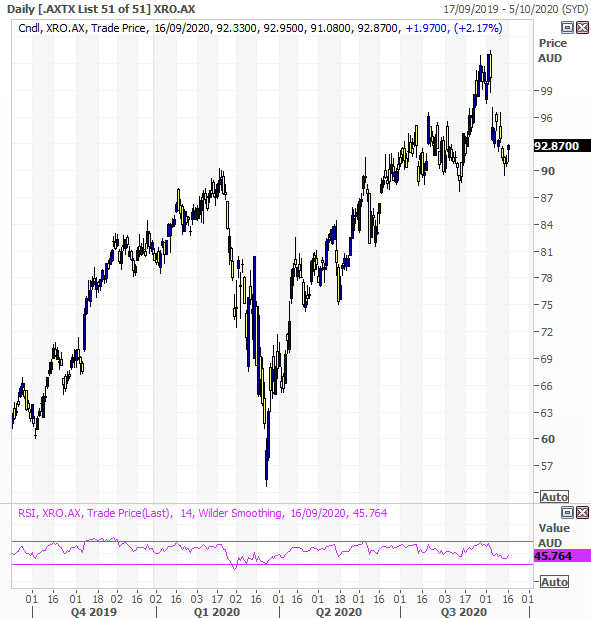 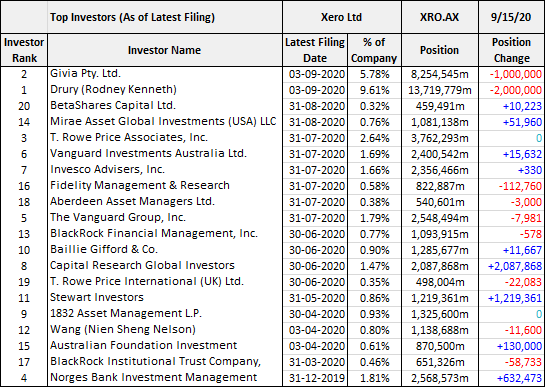 To read our conclusion CLICK HERE to log in to the newsletter if you are a member, or If you are not already a member CLICK HERE to sign up for a 14-day free trial, to gain access to our entire catalogue of Buy Hold Sell articles.