I’m feeling just a little bit more optimistic for the first time in months.  There may be just a chink of light at the end of the tunnel.  If Victoria can get its house in order Australia might just achieve some degree of a new normality.  I know we can’t expect to return to the typical Australian relaxed and easy lifestyle unless an effective vaccine is produced but we might get close.  It is amazing how a simple infectious disease can change society.  Critics of State and Federal governments are talking of police states and fascist-style leaders.  There’s no doubt we are living in a very un- Australian way.  We are used to a democracy where parliaments meet and where issues are debated and decisions made, even if they usually take far too long.  The fact that it’s warm and sunny, tee shirt and shorts, weather in Melbourne helps the mood.

People can’t wait to return to normal but we will have to endure a ‘new normal’ for quite some time.  Life will change but will we have changed too?  Just as the Global Financial Crisis produced a generation of cautious investors will Covid 19 have lasting effects.  Social distancing seemed strange at first.  Deliberately and obviously moving away from people felt like an insult but now is seen as a courtesy.  The impulse to greet someone with a hug or a  hand shake has gone now.  We just keep our distance. 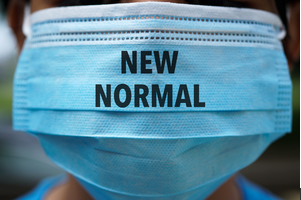 The research shows that it can take as little as three weeks to form new habits or, if you are slow, up to eight months.  The recognized norm is 66 days.  We are well and truly into that.  Unfortunately I can still forget to put on my mask as I leave the house even with a reminder on the door.  Habits formed can take a long time to break as anyone involved in sports coaching will know.  Will we be so used to less socializing that we no longer need other people or will we be so starved that we will not be able to get enough?  Will people lose confidence in interacting with one another?   Young people I’m sure will very quickly return to former habits but I think the oldies may take some time.  The most frail may need a lot of help to rebuild confidence.  Seeing every passer-by as a threat will stay with us all for a long time.

‘Zoom’ has taken on a new meaning like so many words adopted by the digital world.  With travel and gatherings restricted Zoom and similar programs have seen a bonanza as families and social groups turn to them as the only substitute for real connection.  They have become an essential tool for business survival.  Initially people enjoyed the freedom of working from home and many still do, but I hear more and more people saying they miss the social aspects of work, and team leaders saying it’s much harder to provide motivation and leadership.  Change in that area is inevitable, probably with a blend of home and office.  The impact will be far ranging.  Less travel, more time for the kids, higher house prices outside the cities and less pressure on public transport.  Maybe a lot more fit people riding bikes.  Would that put less pressure on the health system too?

We haven’t been on a train, tram or bus since February and we will have to be very sure that the virus has been well and truly eliminated in Melbourne before we do.  Whilst our pollical leaders have never stated that their objective is elimination, the border closures, both state and international, and the target numbers for lifting restrictions all point that way.  Australia has very low infection numbers by international standards whilst we still have restriction more severe than most.  Thankfully we also have a very low death rate and according to figures at the end of June our economy is performing better than most of the developed world except for Norway and China.  You would have to conclude that our leaders both State and Federal have done well.  It’s hard to get more up to date figures as the next quarter ends in September.  Given Victoria’s recent problems they will be interesting to see.

Victoria is now suppressing its second wave just as many countries are either in the second wave or showing signs of developing one.  Numbers in France, Spain, UK and the US have all started to trend upwards again.  Most are hoping to avoid a second lock down but Victoria has shown just how quickly things can get out of hand.  They should be very wary.

People who never considered on line shopping are now well and truly into the habit. It’s been a salvation for retired people like us who are considered to be most at risk.  In some countries the over 70s have been confined to their homes.  My wife gets frustrated by the web sites and can’t wait to be able to browse through the shops.  There’s an entertainment element to real shopping which the computer screen simply cannot provide.  Eating out is an entertainment too particularly if it includes a group of friends.  Collecting your chicken vindaloo in a cardboard box and rushing home to eat it whilst it’s hot is just not the same.  It’s obviously not the same for the struggling restaurants either.

That great pastime of the retired, travel, has taken the biggest hit of all.  Overseas travel is currently impossible and interstate travel almost as bad.  Most of us are finding that there is a lot to explore in our own state and even our own suburbs but the desire to travel further afield remains.  It may not be too long before we can travel interstate but overseas looks to be later next year at best and that depends on an effective vaccine.  When the world eventually opens up as I’m sure it will what will the cost of travel be?  We may well have to wait a while to see the cheap airfares which we have all enjoyed for so long.  Even booking any sort of seat may be difficult and when you get to your destination the hotels could be full.  There will be a rush but it might start with a trickle as the courageous take the first steps..

I feel we are all like the runners at the start of the Melbourne Marathon with the starting gun being a jab of vaccine in the arm.  Future normality depends on that jab being successful.  We are all anxiously waiting.

In the meantime keep safe

If you would like to hear more from Harold and the Marcus Today team, sign up for a 14-day free trial to our newsletter HERE