Super For The Long Term

‘Superannuation is for the long term’.  I wonder how many people react as I do to that statement.  I immediately have two reactions.  The first and most obvious is that at 82 with 83 approaching at an alarming rate there is no long term for me.  It’s a case of living for the day, week or year from now on.

My second reaction is that someone is making an excuse for poor performance or lazy investing.  It’s popular after a bad year to suggest one year doesn’t matter because “super is for the long term”.  The truth is every year matters and whilst bad years will occur, getting the best possible result out of them is critical.   We all know about compounding, and the last thing you want to do is to compound bad years.

Government regulations for super have been a gravy train for the big superannuation funds.  They jumped in early, signing up big company accounts and locking in enormous numbers of customers.  They didn’t have to work very hard on the investment front as most of their customers were oblivious to their performance.  So many people just accepted that a significant part of their income disappears into a fund somewhere to fund their retirement, a long time in the future.  It’s not an immediate concern when there’s a family to support and a mortgage to pay. 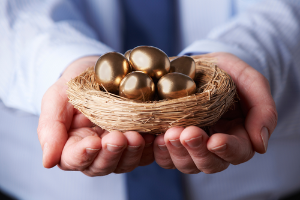 Had the superfunds performed better and justified their fees the current need to increase contributions might not have arisen.  The Industry Superfunds have shaken up that comfortable arrangement by highlighting that annual performance matters and that slightly better annual performance compounded makes a very big difference at retirement.  SMSFs have also taken a lot of market share as people want more control, more involvement and hope to get a better return.

Not every fund can be a winner there will inevitably be winners and losers.  It just pays to make sure you are backing a winner and if not move your hard earned cash.

That’s all history for me and many retirees like me.  We have our nest egg and we live on it.  Annual performance pays the pension.  As I wrote in ‘Doing Nothing’ we could be lazy.  We could just put the money in the bank, divide the total by our life expectancy, whatever that is, and expect to have nothing left at the end.  There would be zero risk but no upside fun either.  I’m left with the question ‘why do I continue to invest?’  Why do I not avoid the stress, save the time of watching the market, save the time reading Marcus Today which can take half the morning when you throw in a cup of coffee and an extended breakfast, and save the cost too?

There are a few answers.  One of the members who responded to ‘Doing Nothing’ said he just likes making money.  He’s been doing it all his life and doesn’t want to give up.  I think that applies to me too and probably to most of the retired members of Marcus Today.  There’s always something to spend it on.  I would have to be a lot more wealthy than I am not to be able to use more income.  A new boat, more expensive restaurants more often, longer overseas holidays when we can escape.  There’s no shortage of opportunities to spend money.  There’s also other people.  That pile of mail we get every week from charities. most genuinely needing money.  We can never have enough for them.  Investing also keeps me in touch with the changing world.  The new technologies, new health care, new ways of communicating.  I like that.

We also have no idea what’s around the corner?  We might use the life expectancy tables but they are averages and we are individuals.  We might live much longer than the norm.  We might need aged care and seeing what has been happening there it’s obvious that you have to be able to afford a good, well run place or suffer the consequences.  If I need help I would like to be helped by someone who knows what they are doing not just the cheapest casual labour that can be picked off the street.

Then there’s the family.  Three grown up children who don’t need anything from us and four grandchildren who might.  With degrees now costing $50,000 or more they are going to begin life in substantial debt.  Our degrees were free!  Add to that the cost of housing and the problem of finding good employment.  Will they be as lucky as we were in being paid well for doing the things we enjoyed?  I hope so.

Finally there’s self-respect.  I wouldn’t want to end my life being known as a financial failure.  Being able to leave something to the family is one measure of success.  Something for them to respect and aspire to.  Maybe that’s an old idea but then I’m an old guy.

Want to read more of our articles? Sign up to our Free Trial Today!