Accommodative monetary policy in the face of the pandemic has given many economies much-needed support, and Australia is no exception. We have fared relatively well throughout the crisis and many Aussies, especially from younger demographics, have continued to embrace housing.

Last Friday the ABS released its monthly home loan report which showed a record jump in the value of loans, up 12.6% in August. The number of first home buyers jumped significantly as well, marking an almost 11 year high. It means that more homes will be built and more newly erected and established homes will be purchased. On Wednesday this week, AFG reported residential loan lodgments in the September quarter of more than 35,400, with a volume greater than $18bn. The numbers eclipsed last quarter’s record-breaking levels. CEO David Bailey noting that the surge was driven by an uptick in First Home Buyers.

It is clear that this isn’t a typical recession. Home loan records aren’t broken in a typical recession. These numbers speak to an underlying confidence in the economic outlook and present the argument that many young Australians have a degree of job security and a relatively high level of savings, catalyzed by lockdown restrictions, which brings me to look at mortgage broking company, Australian Finance Group (ASX: AFG).

In August 2019 AFG announced its intention to merge with mortgage aggregator Connective Group Pty Ltd. AFG received word in June the ACCC would not oppose the $120m merger and is now awaiting the decision of the court. In May, it strengthened its balance sheet raising $60m, which was well received by shareholders.

For the year ended 30 June 2020 the Group recorded a net profit after tax of $38m, 15.3% above FY19. The increase in profit was attributable to AFG Securities loan book growth of 41.3% to $2.91bn. Combined residential and commercial loan book growth of 5% to $163bn. AFG home loans trail book up 14% to $10.5bn. Management adding the pipeline of business currently remains strong.

The shift away from the big four banks, following the Banking Royal Commission, has also benefited the company. Back in September 2019 UBS released a report that highlighted the popularity of commission-paid mortgage brokers, leading the major lenders to question their mortgage broking future. Their share of mortgages sold through branches plummeting, down ~33% in four years as they mull the decision. 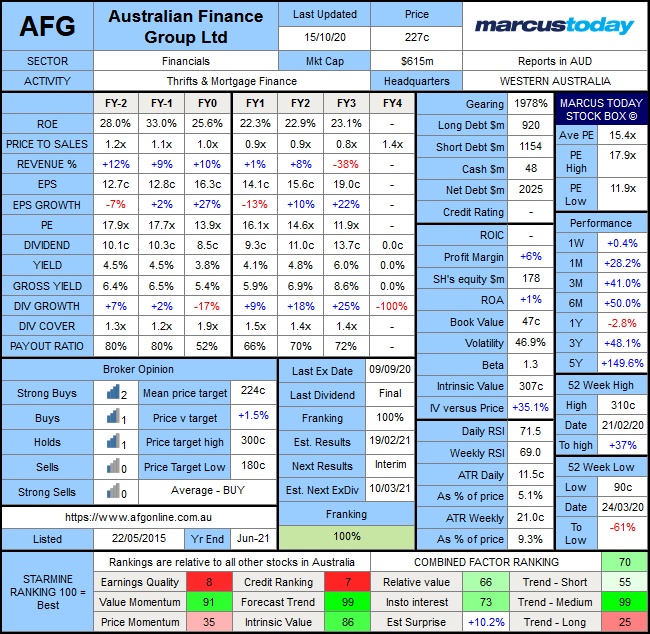 WHAT SORT OF INVESTMENT IS AFG

The stock is up ~150% since its March low, jumping ~30% on the news of relaxed lending restrictions. Support around the 225c level is evolving with RSI moving back from overbought territory. The stock is ~40% off its pre-pandemic high around 300c and arguably in a better position than it was back then. 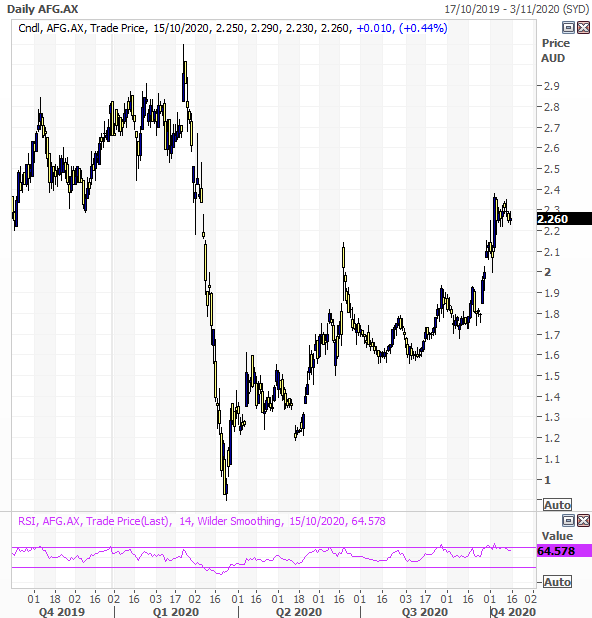 Citi the most bullish with a 300c price target, implying upside of 32%, holds a positive view on the group. Believes AGF has a good chance of maintaining asset yields and avoiding the areas of the mortgage market with the strongest price competition. Macquarie bullish lifting its price target from 234c to 241c following September quarter lodgement numbers. Noting conditions remain attractive for AFG.  Morgans in August observed the dividend was ahead of expectations. Upgraded FY21 EPS forecasts by 2.7%, largely due to higher net interest margin forecasts. Sees significant upside risk for the merger with the mortgage aggregator Connective.

A few observations, firstly, a big sell off towards the start of the year as pandemic fears scuppered demand for residential and commercial loans. Secondly, Perpetual Investments (PPT) picked up more than 12 million shares at the end of July, a nice bit of validation. And finally, overall activity skewed towards buying in the second half of the year. 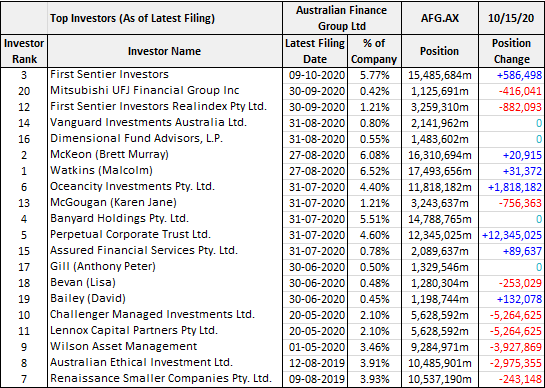 Short interest has essentially moved from nothing to something, topping out at the end of September, likely a result of relaxed lending laws. Short covering on the back of the news may also help the share price. Shorting is below 0.8%, not something to be worried about. 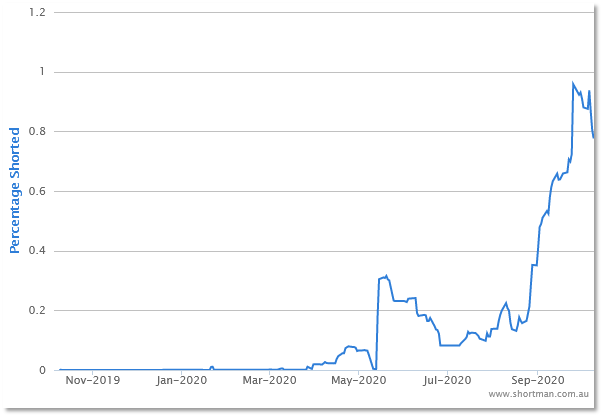 For our conclusion, more Buy Hold Sell research and daily insights from the Marcus Today team. Sign up for a 14-day free trial – CLICK HERE to gain access now.