Are past prices clouding your judgement?

Anchoring, also known as ‘focusing bias’, is the use of a reference point against which to judge value.

You hear the issue every day in a broking office, it’s when someone says “I can’t buy that because the share price is up XYZ%” or “You can’t sell that the price is down XYZ%”. An even more soft-brained development on the theme is when you find yourself saying “It’s down XYZ% so it’s cheap” or “It’s up XYZ% so it’s expensive”.

Making money in shares is all about where the share price is going not where its been.

What you paid for a stock, what price it was in the past, in fact any reference to the share price history ignores the only relevant consideration which should be what the company is worth now or in the future.

Referencing past share prices also ignores the fact that the information/fundamentals/profitability/structure/capital base, can change. BHP five years ago was priced on an different set of facts to BHP now. A lot has changed so what relevance is that old high or old low when it relates to a different set of circumstances. It’s irrelevant.

Despite that it is common practice to reference how much a stock has moved from the lowest low or highest high and it is commonplace to take those past prices as an anchor point from which we judge the current price as being expensive or cheap based on how far it is up or down since then.

Past prices are simply a statement of where a price was.

The more important consideration is where the price is now relative to what the company is worth, because the market’s appreciation of what the company was worth at some point in the past has almost certainly changed. The market’s appreciation of the value of a company changes as time progresses rendering any past price effectively redundant as a reference point. As soon as the value of a company changes, which arguably it does every day, you have to move your thinking along.

Anchoring can also be exploited as a negotiating trick.

To really make a stock judgement you only need consider a more malleable reference point – like “intrinsic value”. Past prices are the most unscientific of starting points. Scientifically calculated prices, using current data, are a much better guideline.

Another amateur manifestation of anchoring is buying stocks because they have fallen a lot.

This is technically wrong anyway but also ignores the fact that the market’s assessment of the value of the company has changed markedly for the worse, so it is even more inappropriate to reference where the price (erroneously) used to be.

The other very widespread use of anchoring is when traders use their purchase price as a reference point. “I’ll sell it if it goes up 10%” or “I’ll sell if it goes below my purchase price”. All very nice but not rational, although, in its defence, anything, even unscientific anchoring, is better than nothing when it comes to having some trading discipline.

An extension of anchoring is ‘lazy jargon’.

The best way to avoid anchoring is to forget the past price as a reference point and simply assess ‘cheap or expensive’ on some other criteria – like PE history, or price relative to an intrinsic value calculation.

Meanwhile you can amuse yourself by listening out for anyone, you perhaps, making comments or decisions on the basis that a stock is up X% or down X%. The only thing that matters is what the market/you perceives something to be worth.

Your sole focus is whether a stock is going up or not. Whether it’s gone up or not. That, is irrelevant. 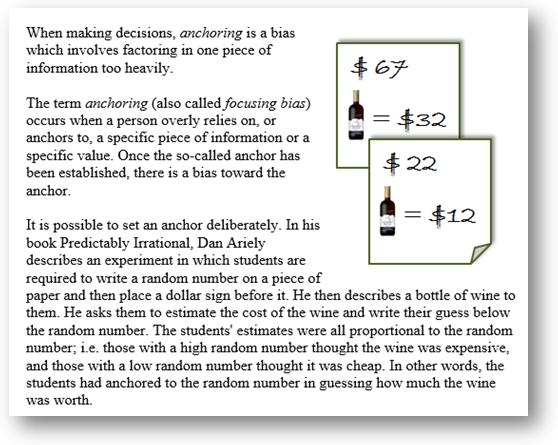