Last week Marcus sold down his (ASX: QAN) holding in the MP growth portfolio, we still have a 1.5% position and have discussed what conditions we would want to see before topping that up. Today’s article explores that idea.

Vaccine optimism has been largely overshadowed by the deteriorating virus picture and the US election. With 10-vaccines in phase three trials, hopes are rising for approval by the end of the year. So, what stock is likely to re-rate strongly should a vaccine be crowned?

Qantas (ASX: QAN) arguably has that potential and while revenues will take a long time to reach pre-pandemic levels, we know the market will move quickly on the prospect of COVID-normal air travel. Even with a vaccine, it should be acknowledged that the time frame for a return to full capacity is in years, given the practical side of inoculating an entire population. Criticism of QAN’s investment case points to possible waning enthusiasm once that issue becomes more apparent and the initial hype has worn-off.

The other tailwind for QAN is the improving picture on the local front. News of Victoria’s relaxed restrictions and the potential re-opening of state borders prior to Christmas, paving the way for increased revenues. NSW Premier Gladys Berejiklian today announced that NSW will reopen its borders to Victoria from 12.01 am on November 23.

Alan Joyce talked about the need for reinvention at the company’s AGM last month. The business is, without question, going to be structurally different to the pre-COVID flying kangaroo we knew. Flying Joey perhaps? At least for a while. $15bn in cost savings over the next three years, mainly through reduced flying activity, with $1bn in ongoing cost improvements from FY23 some of the headline numbers.

The delay in border reopening has also come at a cost, ~$100m negative hit to earnings for the first quarter of FY21. QAN had expected to be at 60% pre-pandemic domestic capacity by now. That said, its three-year recovery plan remains on track. Anticipating a boom in domestic tourism once restrictions are eased further. Forecasting domestic market share to grow from 60 to 70% now that virgin is changing its strategy. 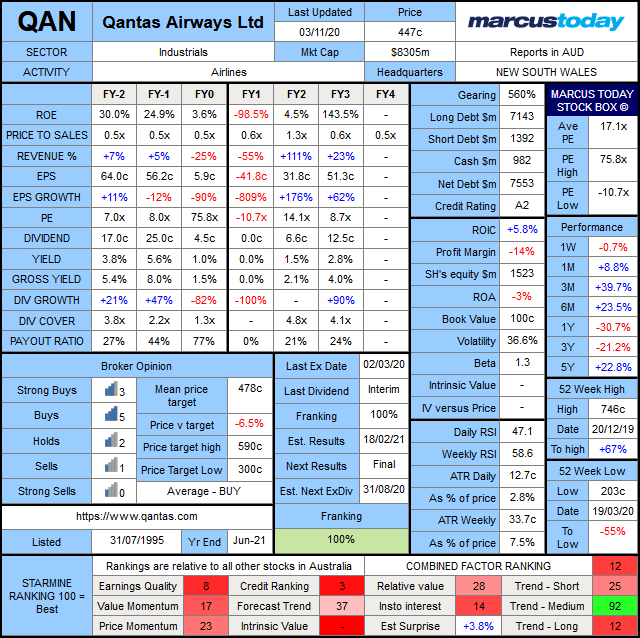 WHAT SORT OF INVESTMENT IS QAN?

QAN is a domestic recovery play and to a lesser extent a global recovery play until a vaccine is found. Clarity is improving around domestic travel and demand is expected to be robust. QAN’s scenic flight (to nowhere) sold out in ten minutes earlier in the month and 20K seats sold in 36 hours when the SA/NSW border opened. It is also looking to diversify to locations that weren’t previously part of its pre-COVID network, naming Korea, Taiwan and various islands in the Pacific as potential destinations while it waits for its core international markets to re-open. The re-direction of international travel is also viewed as an opportunity, with 11m Aussies that usually fly overseas now likely on the hunt for a domestic trip or two. A strong liquidity position and a significant base of unencumbered assets, progress in its three-year transformation and signs of domestic appetite are the pillars that buoy management confidence.

It is a simple investment case, people will want to travel and you’re looking at a company that is arguable undervalued. We’re not taking an obscure data point and extrapolating that into a grand hypothesis. But it should be said, that in hindsight, not all good investments need to be complex. Right now, you could distill all the numbers, the late-night calculations, the board meetings of high-profile fund managers from the last few years into two words, buy tech. If you knew that in 2015, you would not have had to change your strategy once.

Morgan Stanley retains an OVERWEIGHT rating following the AGM, comfortable with the liquidity and “normalised” valuation upside despite volatility to pandemic-related news flow. Macquarie suspects QAN is likely to experience a faster recovery domestically as borders continue to re-open and pent-up demand for movement around the country occurs. Lifts FY21 estimates by 7% while lowering FY22 by -17%, largely due to lower average seat kilometre assumptions. Target price lifted 16% to 495c, implying upside of 12%. UBS considers the QLD state election a key catalyst for the pace of domestic recovery.

Noting a favorable outcome could lift the capacity offered by airlines from 25% to 45% even if Victoria and WA remain closed. Calculates QAN could generate $600m of profit before tax and $800m of free cash at 70% of its pre-COVID capacity.

SHORT TERM TECHNICAL OVERVATIONS Since the March low QAN is up ~120%. The stock found a bottom at 320c in the lead up to its result on August 20. QAN is up ~20% since releasing its full-year report. RSI is elevated although not yet in overbought territory. What is interesting to note is the high in June ~500c. Going off the broker target prices, it’s likely they see 500c as a possible resistance level which will be hard to break. The stock will have to climb 12% before we find out. Macquarie the most bullish of the brokers with a 495c price target. None of them, however, commented on vaccine optimism and the potential catalyst that would provide to the share price. The stock has also printed a 3MA buy signal. 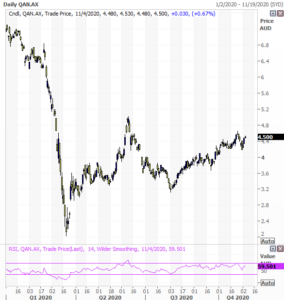 TOP SHAREHOLDERS QAN is not finding favor amongst its largest owners, BlackRock offloading more than 26m shares at the end of September. Vanguard dipped its toes in a bit more at the same time, along with US Global Investors but nothing significant. 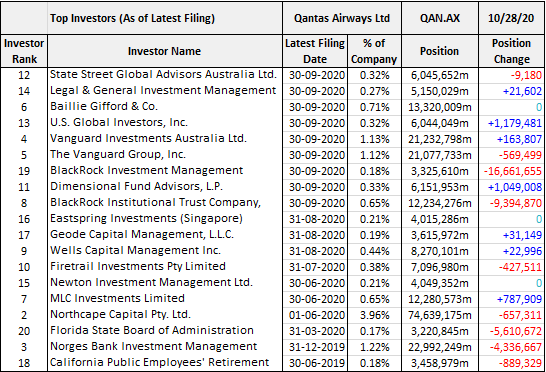 SHORTING QAN’s short interest has fluctuated quite a bit over the past 12 months, currently at 2.04% – a 12-month high. Interesting to think some people see it in a worse position now compared to the start of the year, when there was more uncertainty. While the trend from July isn’t pleasing, short interest isn’t at a level to be concerned with. On the bullish side of the argument, it adds more fuel to a possible short squeeze. 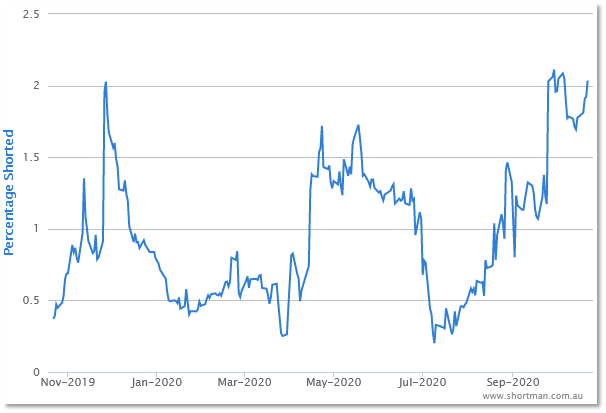 To read our full conclusion on this Buy, Hold, Sell, and other articles like it – sign up for our 14 day free trial