Less than four weeks to Christmas. The commentators are already talking about the “Santa Claus Rally” which is when the market seasonally rallies into the New Year.

It is a well-accepted market phenomenon, and there is some logic behind it.

A lot of financial decisions are made by companies and individuals at the end of the tax year which for a lot of the northern hemisphere is December 31.

One of the big decisions is what to do with profits and in the case of individuals in particular that quite often means there is this decision in January to put the money into the equity market.

With a pandemic recovery and a stock-market rally going on, a lot of that will find its way into the equity market. Net result a lot of fund managers are handed money at the beginning of the year, and they invested in January.

The Santa Claus Rally is the market running in anticipation of a good rally in January. It is more a US thing than an Australian thing (our financial year-end is June 30, not December 31) but with such a high correlation between our markets, we also participate.

This chart shows the effect working in Australia. 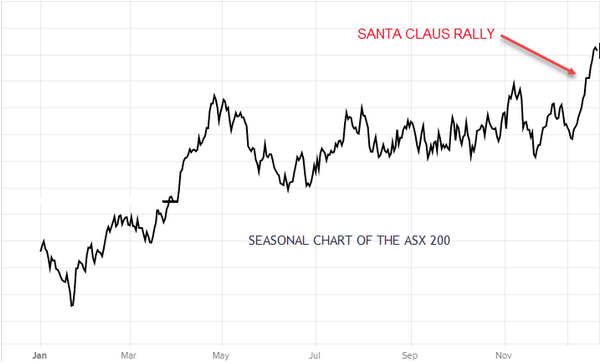 This is the ASX 200 (ASX: XJO) “Seasonal Chart” since 1990. It shows the average performance of the market over the calendar year, month by month. So you can see that on average the market has its best months from December to May and goes sideways the rest of the year, hence the expression “Sell in May and go away”.

But for now, its Buy in December.