The Vaccine/Biden inspired rally and subsequent rotation into ‘value’ stocks struck down by the pandemic has helped the market print its best month since March 1988. It’s left a lot of investors wondering, what the Tech?

Energy stocks have been the best performers last month, surging by almost 30% vs the market up 11.2%.

The All Tech index underperforming, up only 7.3%.

The Marcus Today Portfolios have adjusted to the change in sentiment well. We have been vocal about the move into vaccine beneficiaries. But, for those who haven’t been as agile (many valid reasons spring to mind), and are still in the growth and momentum pandemic beneficiaries, questions linger about what to do. This article aims to answer some of those questions about the medium-term prospects for the underperforming technology names.

Valuations this year have been difficult to assess. Put it in the too hard basket and ride the wave, the likely mantra of many. A notably profitable decision, but now with clarity returning into the investment landscape given the vaccine and US election, it is time to reassess where certain stocks stand.

Articles and research attempting to explain the influence of low-interest rates and the acceleration of COVID-trends on the share prices are seldom without rubbery assumptions. As one commentator said last week, “If you do a discounted cashflow using low-cost money it’s going to come out whatever you want.” The emergence of novel valuation methods like ‘price to revenue’ also labelled as red flags.

Some analysts, in an effort to explain valuations, have looked at total addressable market (TAM) scenarios to rationalize the qualitative and quantitative factors that drive Australia’s tech sector. Some figures range from optimistic to ridiculous.

Pro Medicus (ASX: PME), a radiology software company, has a TAM of $2.1bn, and a potential TAM of $7.1bn, according to UBS. That’s a big difference in actual vs potential. Its current market share is about 2.7%.

By comparison, Afterpay’s (ASX: APT) current TAM is $248 billion, of which it has a 0.2% share; UBS believe it could eventually grab a 0.1% share of a $416 billion market. A pleasant but more likely fanciful set of numbers for shareholders in those companies.

As for traditional valuations, it’s clear tech companies are trading on multiples that imply the continuation of current growth rates well into the future. Within those numbers lie assumptions that competition will remain idle and consumer trends will remain constant, i.e at their COVID-inflated level. We all know that is not likely to be the case.

While the pandemic has accelerated many business models, few tech companies can justify current lofty expectations. And the change in sentiment from the vaccine has put that to the test.

So, is the tech trade dead?

Sentiment shared by many members in the Facebook group the other day. It’s likely slowing down and perhaps there will be a pause at earnings catch up to the heightened share prices.

The overpricing of many tech stocks is one of the issues that has seen a rotation in the past few weeks. But we already knew tech stocks were overvalued by traditional valuation metrics. What’s more recent is the pace of underperformance has started to slow as momentum from the rotation loses steam. Tech has started December ahead of vaccine beneficiaries, like energy. A very short-term appraisal but not something that shouldn’t go unnoticed.

Below is a list of the performance of every stock in the All Tech index since the first vaccine was announced.

Highlighted in yellow are the companies with a market cap over $1bn. 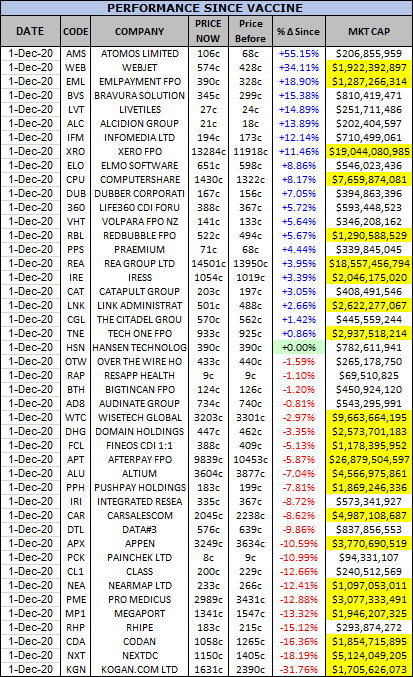 Let’s have a look at some of the hardest hit names: KGN, NXT and APT.

Travel and leisure names have, not surprisingly, already stolen the attention of discretionary spending. Demand for flights evident as borders reopen. Henry driving around Victoria attested to the demand and vibrance in the major tourist areas of the state. Bad news for the likes of KGN, which is down 31%.

This morning KGN announced the acquisition of online retailer Mighty Ape for $122.4m. A complimentary business with revenue and cost synergies envisaged. A nice bolt-on but not really a game-changing move.

Brokers see upside in the share price. The stock has just moved back from overbought territory. Support around 1600c appears to be holding with perhaps much of the negative aforementioned remarks priced in. 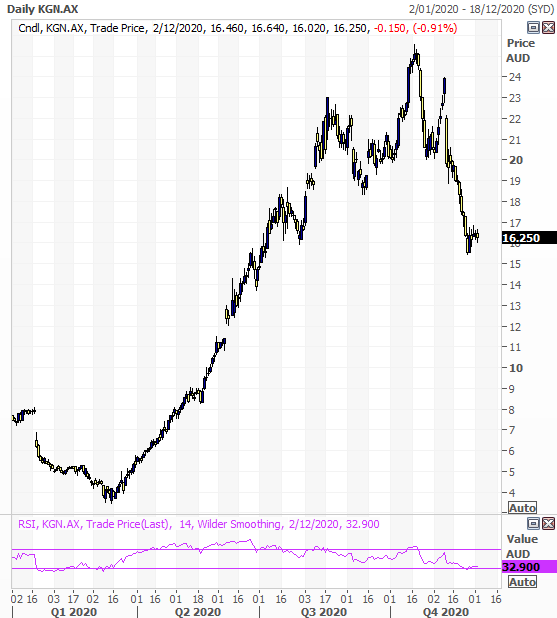 Starting to look attractive given the slowdown in selling/rotation into vaccine beneficiaries. 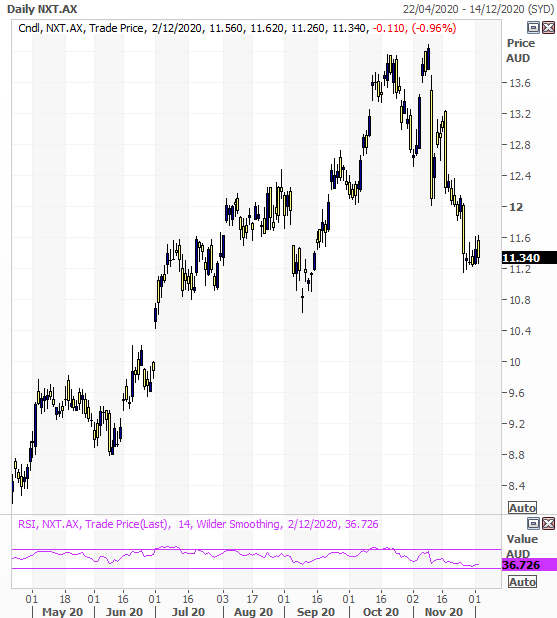 This year was APT’s year, not likely to see a replay of the same performance next year, unfortunately. Better value elsewhere given scarcity of catalysts. 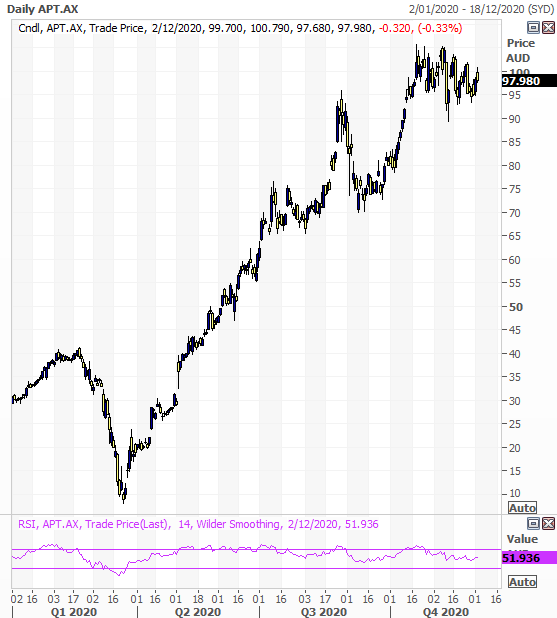