Another hot listing for this week’s Buy Hold Sell, Airtasker (ASX: ART). As pointed out in the Facebook group, it is arguably too early to provide as  in-depth an appraisal of the company as we usually do, nor apply a rating to it. Instead, we have decided to orientate the piece as more of a company review, given its infancy as a listed business.

The IPO hot property, more than five times oversubscribed by retail and institutional investors. Not to mention a large appetite from existing and past employees with 45% of Airtasker staff participating in the float at an average investment of $22,400. Not many businesses would see staff that enthusiastic about trading salary for equity, which points to a good culture and internal confidence. Closed its first day of trade up 61%.

Revenue is a function of gross marketplace volume (GMV) as Airtasker earns revenue by charging a fee to ‘taskers’ and a booking fee to ‘customers’, which are calculated as a percentage of the price of tasks. The table below breaks down the transaction.

The prospectus highlighted strong performance for the start of the second half, despite capital city lockdowns. It added that all metrics are performing at or above expectations. Management is confident it can meet or exceed forecasts, expecting a 20% lift in revenue, to $24.5m this financial year. Historically, July to December has been the period of strongest growth. The company’s net loss is expected to almost double in FY21, but that’s not a metric you should be focusing on with a growth company. The main focus for the market will likely be customer numbers, which are anticipated to improve 10%, to 405k (unique paying customers), and the value of tasks, with an 18.9% improvement touted this year, to $189 per task.

The obvious comparison in the ASX is Freelancer (ASX: FLN) which floated in 2013. In seven years, the stock has fallen ~60%, to 58c. The business has struggled to grow profits since listing.

Unfortunately, there wasn’t a comment in Freelancer’s report on average task value, task rate or customer acquisition cost (CAC), which would have proved insightful. For those interested, ART’s CAC is minuscule; currently $1.02, down from $4.45 in 1HFY20.

Freelancer does not have as wide a marketplace and promotes itself as a connector of more professional services, such as software development, writing, data entry and design right through to engineering. More cerebral tasks. Airtasker targets a day-to-day, labour intensive task demographic but also caters for the other end of the spectrum. Operating in what it calls an almost infinitely horizontal marketplace, with the ability for customers to request almost any service and for taskers to adapt their service offerings. That said, it would be naive to think FLN couldn’t do the same thing and expand its offering. Hipages, Oneflare, ServiceSeeking, Task Rabbit, and Rated People are ART’s more direct competitors.

What ART has been able to do extremely well is build a strong brand, from which many operational tailwinds have evolved. Dean Price, a portfolio manager at SOL in an interview with the AFR commented on ART’s impressive ability to build marketplace liquidity. Adding, “a business like Hipages has to spend on marketing to both customers and tradies, but Airtasker has a low cost of customer acquisition because the brand is strong.” Last year, almost 100% of new customers came from non-paid marketing channels, which is an incredible statistic, implying a massive level of organic brand awareness and a high level of user satisfaction. Sticky customers are the spoils; 66% of gross marketplace volume coming from returning customers in FY20. Another point of difference to highlight is that labour based marketplaces typically have a profit margin of ~30%, a stark contrast and well behind ART’s 93%.

WHAT SORT OF INVESTMENT IS ART?

ART is a growth play on the gig economy; the system in which temporary positions are common and organisations hire independent workers for short-term commitments. COVID amplified the growth of that ecosystem with a current estimated value of ~US$300bn. There are expectations it will hit US$455bn by 2023. Even before the pandemic, the gig economy was growing at three times the rate of the US workforce (8.1% vs. 2.6%), according to Statista. Back home, the local services economy is particularly large and improving with the successful management of COVID. The size of the total addressable market is $52bn in Australia, as estimated by Frost & Sullivan, but there are calls that may be an underestimation. Airtasker is arguably in a sturdy position to capture a significant portion of that growth, but low barriers to entry are a consideration to be wary of. At the moment, only Airtasker and TaskRabbit are the major marketplaces offering local services through a service fee/commission revenue model. TaskRabbit currently overlaps with Airtasker only in the US and UK markets. 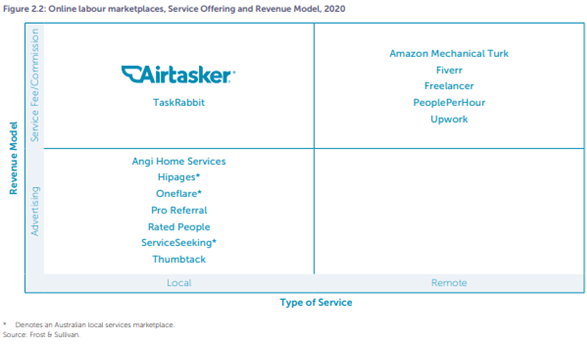 Airtasker is also well positioned to benefit from network effects. Essentially, it means the more customers use the marketplace, the better the experience becomes for other users. A positive feedback loop. Revenue is tied directly to the amount earned by taskers which ensures that it is closely aligned with the success of taskers, customers and the broader community.  A win-win situation. That said, Tom Richardson, a reporter with the AFR in a recent article noted “the remote work and digital giants such as Fiverr, Upwork, Amazon, Gumtree, Google and Facebook all boast better network effects and the potential to move deeper into the manual labour space.” Feels like a BNPL-esque landgrab could be on the cards at some point.

Apart from the growth of the market it operates in and strong network effects, which both have their pros and cons. The jewels in ART’s crown are debatably its brand strength and loyalty. Two very powerful assets to have. Recent success largely a function of a growing community of repeat users. ART peddling its ‘sticky’ userbase as a significant competitive advantage. Looking at reviews, it is simple to use, easy to understand and targets a wide demographic. Very scalable operations another positive tailwind for business margins.

Peeking ahead, Airtasker has outlined some steps to help it achieve customer and tasker acquisition, improve usage frequency and expand the addressable market including:

To read this conclusion and other buy hold sell research articles, sign up for a 14-day free trial to Marcus Today. CLICK HERE to get started.