Mineral Resources (ASX: MIN) is more than your average miner with a few divisions under the umbrella. It recently presented at the Bank of America mining conference and highlighted that it is a leading pit-to-port mining services provider, a top-five lithium miner with joint ownership of the largest hard rock lithium deposit, and the fifth-biggest iron ore producer in Australia.

The presentation was basic and to the point, setting out the five-year plan neatly. The market responded positively, sending the share price more than 3% higher on the day.  The aim for MIN’s lithium operations is to convert all spodumene to hydoroxide, an increasingly favoured compound that allows greater energy storage and better range in electric vehicles.

The company sees iron ore production growing from 20mt per year to 90mt. It has ambitions to grow crushing contracts with external mining companies and is looking to pursue natural gas opportunities to help replace its need for diesel, a move that will help it reach net zero emissions by 2050.

Its March quarter report revealed iron ore production of 4.9mt, shipping 4.1mt at an average price of US$145. Of concern, however, was a miss on its haulage goals, pointing to a shortage of truck drivers given border closures. Uncertainty surrounding that issue leading to a revision to shipping guidance. On Tuesday, JHX and SBM also warned of cost pressures and lack of suitable staff, especially in WA. A tighter labour market, even with relaxed restrictions, keeping that issue alive, whilst unemployment numbers out yesterday fuelled that concern.

Frustration for management is growing on the back of delays in securing WA government approval to develop new berths in Port Hedland, discussions understood to be ongoing since 2018. MD Chris Ellison is reportedly now preferring road trains, but he’d prefer them even more if he had enough drivers. On a positive note, MIN is reportedly gaining momentum in its ambition to unlock stranded iron ore assets in WA, through a joint venture with Brockman Mining.

On the lithium front, operations at Mt Marion are believed to be on track to meet or beat guidance for FY21. Construction of the Kemerton Lithium Hydroxide Plant, which is a JV with Albemarle, is on track for completion in the second half of the year. Also of interest is the recent $4bn merger of lithium miners, Orocobre and Galaxy. While some of the hype and headlines have quietened down, the moved has stoked speculation about further consolidation in the sector.

On top of the higher AUD which is making our commodities a bit pricey, there has been increasing chatter about China’s push to put a cap on prices which has taken some of the froth off commodities. Newswires have been reporting China will lift domestic production and look for other sources outside expensive Australian seaborne iron ore. BHP CEO Mike Henry downplayed concerns at the Bank of America Conference, saying “the outlook for commodities is compelling.” 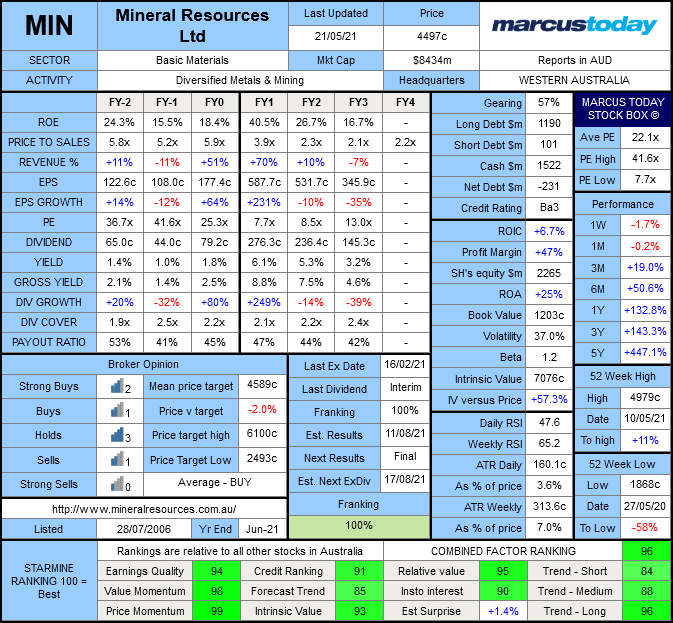 WHAT SORT OF INVESTMENT IS MIN?

There is no avoiding the fact that MIN is a commodity play and, as such, is inextricably tied to the price of the materials it pulls out of the ground. The tailwind of a commodity boom filling its coffers with margins splitting at the seams. Growth and income the spoils for shareholders. The diversified nature of its operations are pleasing from an investment perspective, as its lithium operations and the electrification of the world gains momentum. Its ability to manage higher costs and labour shortages will be key to its near-term success.

It is important to remember a company like this is not a set and forget investment. As Henry pointed out recently, every commodity has a run at some point, and they tend to overshoot to the upside, and then overcorrect to the downside. You wouldn’t want to be holding MIN during the overcorrection so vigilance is essential.

Macquarie the most bullish with a price target implying upside of ~30%, citing attraction in MIN’s commitment to growing its iron ore business, growth potential in its lithium segment and upside from mining services. Citi labelled it a ‘leading edge operator’ in the lithium market and considered it an agile and fast-moving operator in iron ore. Of most interest is the broker’s appraisal of a potential near-term opportunity via the Ashburton hub. Calculates it could unlock almost 660c per share in value. The research left a bit of mystery around the details. Morgan Stanley with a more dated recommendation. Iron ore price realisation in April was below expectations which is understood to mean widening grade discounts alongside lower lump sales. China has a preference for higher quality ores as there is less of an environmental impact. FY22 earnings also expected to be hurt by a in lump production at Koolyanobbing. UBS in March assessed that its mining services business could grow to ~860mt contract tonnes by end of 2022 from 429mt in 2019 led by growth in internal and external business. Cautioned higher expenses on the back of operational cost increases.

MIN has been buoyed by the commodities boom, up ~130% over the year to date. It is just off highs but remains in a relatively solid uptrend, which is enough to satisfy the 3MA criteria. The next few sessions will help inform whether it is going to bounce off the bottom of its trading range or move lower. Given the commodity tide, there is arguably more upside to be had. RSI in the middle of the range. 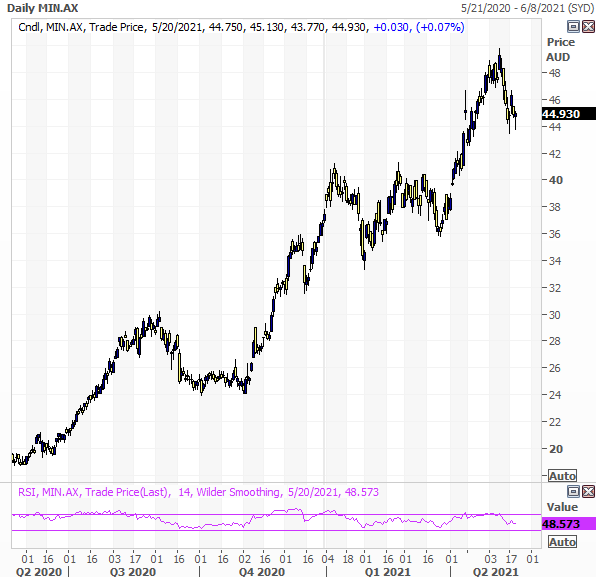 Managing director Christopher Ellison was named Australia’s newest billionaire in September 2020 and as a driving force behind the expansion of the company. TDM Growth Partners co-founder Hamish Corlett who is understood to have backed Mineral Resources since its IPO was quoted in the AFR saying, Mr Ellison was “one of the most talented, commercial chief executives that we have ever invested in.” you would assume Mr Corlett has done quite well out of MIN as you wouldn’t be saying that about an executive who’d lost you money.

Encouraging to see the MD with a significant investment in the company with an 11.75% holding, worth ~$1bn currently. Large purchases from Mitsuibishi UFJ Financial group and First Sentier Investors outweighing sells from Airlie Funds Management and Norges Bank (NBIM). 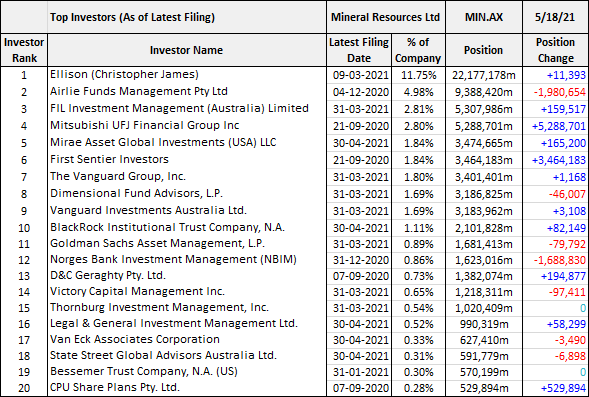 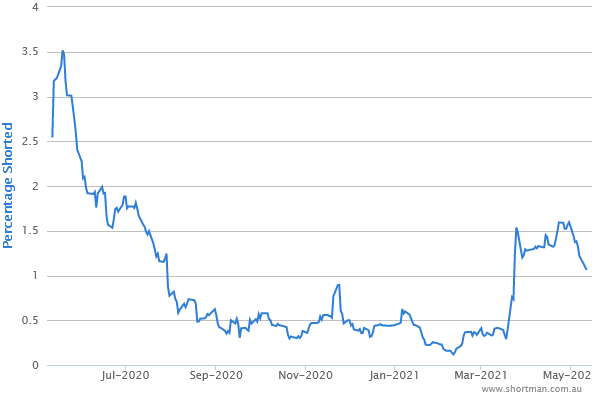