Endeavour Group (ASX: EDV) is the value release from Woolworths (WOW) and the biggest capital market transaction of the year with a $12bn valuation on listing. The split is as neat as they come with a one-for-one distribution of Endeavour shares to Woolworths shareholders. WOW will keep a 14.6% interest in EDV, and Bruce Mathieson Group (BMG) will also hold a 14.6% interest. The new company will list on Thursday.

The good news about the separation is that WOW will continue to support EDV with its operations by maintaining the collaborative relationship that it already has. The main takeaway is that supply chains and loyalty programs will not be interrupted, but there is a cost, each year Endeavour expects to pay Woolworths $564m for access to its loyalty program. 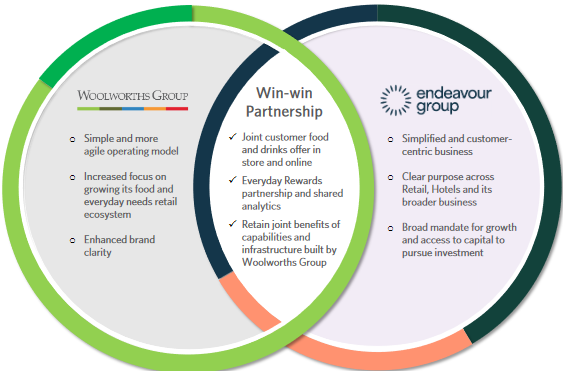 88% of the revenue for the newly listed business will flow from its retail operations, which are marketed as Australia’s leading drinks and hospitality businesses. It has 1630 Dan Murphy and BWS stores and operates a portfolio of 332 licensed venues with 12,000 electronic gaming machines. Dan Murphy’s and BWS both touting impressive customer numbers as the top two spots on the podium for preferred retail drinks brands in Australia. The Endeavour group posted $10.6bn in revenue in FY20 although that was distorted by COVID abnormalities.

Concerns about how it is going to cycle through elevated sales numbers from COVID are lingering in the background, but given the sales figures were released at the end of April much of that is arguably priced in. That said, the hotels business has counterbalanced some of the softness with second-half EBIT expected to be well above last year’s assuming venues can continue to trade without further restrictions.

Credit Suisse downgraded WOW on the back of the split, noting EDV was an important catalyst for the supermarket operator, the price target was lowered only a fraction to 3798c. The broker added Endeavour Group has a varied profit history observing the hotels have received higher levels of investment than retail despite achieving low returns. WOW is also understood to be mulling a possible capital return following the separation, flagging $1.6bn-2bn in possible distributions.

The senior management of Endeavour Group will include Endeavour Group’s current Managing Director, Steve Donohue, who has been appointed as CEO-elect. The man started selling wine at Dan Murphy’s when he was 19 and managed to work his way to the top.

Shane Gannon has been appointed as CFO and commenced in April 2021. Gannon was previously the CFO of Mirvac (MGR) and CSR Limited (CSR). He will be supported by the current Finance Director, Kate Beattie, who will become Deputy CFO. The existing operational management team is to remain in place.

WHAT SORT OF INVESTMENT IS EDV?

The demerged business will list as a top 50 company by market cap touting a collection of strong established brands. A benefit of the size is that EDV will have to be purchased by funds tracking the top ASX indexes. Fundamentals reflect robust operating cash flow and access to liquidity from which it can fund growth ambitions and capital returns to shareholders. Endeavour Group intends to initially target a payout ratio of 70-75% of profit before significant items and will follow Woolworths Group’s dividend policy. Based on last year’s financials ~19c of the WOW dividend came from EDV.

On that front, growth drivers for the business will be category expansion and the Pinnacle Drinks opportunity in premium and craft categories. Acquisitions of new hotels and general digital improvements that will look to complement brick and mortar stores.

What is important to be mindful of is that it is a mature business with the majority of its revenue coming from the consumer staple’s category, so it’s not likely to be a knockout growth story. That said, EDV in comparison to WOW will offer exposure to the retail drinks and hotel hospitality industries which generate higher margins and have greater potential growth.

On the other side of the equation, Endeavour Group could be more volatile as it is heavily regulated (with regulation varying from state to state), any change in the regulatory environment could materially impact the profitability. Exposure to the hotel sector is anticipated to add to volatility given covid interruptions and restrictions are still lingering.

There is debate about how much ESG issues will weigh down the business’ strengths. Debate ignited following a scathing evaluation of its now-abandoned proposal to open a Dan Murphy’s mega-store in Darwin. Backlash centred around the argument that it was putting profit ahead of public interest. While it clearly hasn’t inhibited the IPO, it has added a bitter precursor to the float. Exposure to gaming may also temper interest as it may not align with everyone’s investment philosophies.