Healius (HLS) is a leading healthcare company that operates three main segments – pathology, imaging, and day hospitals/IVF. Recent support has flowed from its involvement in COVID testing, the pathology unit hit the 3m tests milestone back in May. The emergence of the Delta strain signalling to some that testing is likely to remain a core part of earnings into FY22 even despite the vaccination roll-out.

Recent headlines have centred around its IVF arm which has been the focus of several interested parties, Virtus Health (VRT) named as one potential candidate. There are reports management is also looking to divest its day surgeries business (not including short-stay hospitals or Montserrat associated day hospitals) and strengthen its imaging arm. 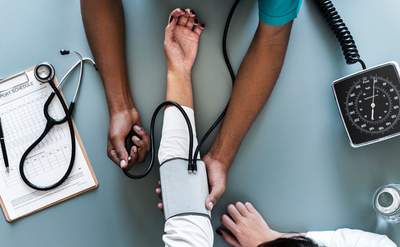 Conjecture supported by its acquisition of Queensland-based imaging business, Axis Diagnostics. The day surgery business has been valued at ~$100m with upcoming results expected to shed more light on management’s plans for the business structure.

72% of HLS‘s revenue comes from its pathology business, 23% from its imaging and a meagre 4% come from its day hospitals. The breakdown illuminating why the business is likely looking to simplify its offering further after selling its Medical and Dental centres arm for $483m last year. Chief Executive Officer, Dr Malcolm Parmenter alluded to its high performing and ‘simplified’ portfolio in February, perhaps he was also foreshadowing plans for the future.

The first half 2021 dividend more than doubled the 2020 half-year payout, buoying expectations of a healthy capital return to shareholders given ‘very strong’ operating cash flows in the third quarter. On the capital management front, HLS has completed more than 50% of its targeted $200m buy-back. May’s trading update also touched on organic margin growth from business simplification and efficiency adaptions. 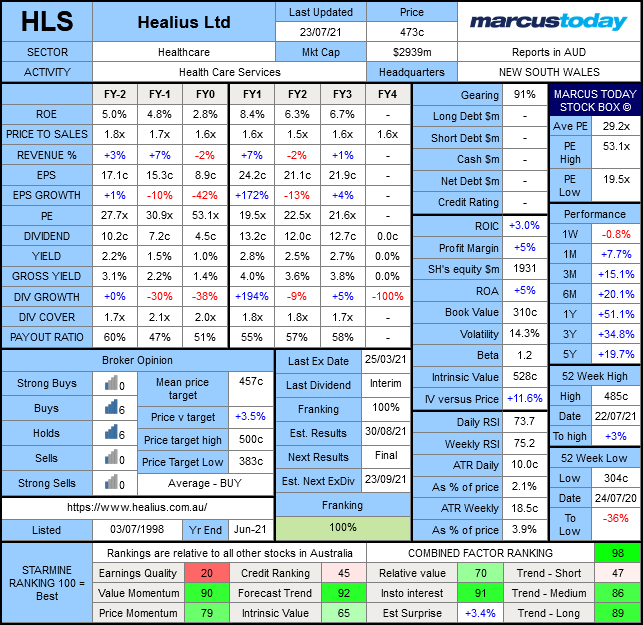 WHAT SORT OF INVESTMENT IS HLS?

Healius (HLS) is a defensive play in the healthcare space with earnings tied to the success of its pathology business. You also get a healthy 4% yield just for holding it. The growing level of corporate testing is pleasing, ongoing outbreaks and the likelihood of increasing COVID incidents when borders do reopen (an unwelcomed thought) will play a role in that success. Its second-biggest segment, imaging, has also experienced solid revenue growth into the last quarter of the year, one tailwind is the change to Medicare rebates for MRI scans which was announced in this year’s federal budget. Medicare rebates for MRI scans will be unfrozen from July next year. Indexation will also be reintroduced to bring patient rebate growth in line with inflation. In simple terms, it means MRIs will now be priced the same as x-ray, ultrasound, mammography and CT scans which were all indexed from July last year.

Strong performance from its two biggest segments has positioned HLS well for the August reporting season. It is also one of the few businesses that actually benefits from lockdowns given its leverage to testing.

Brokers are largely bullish on HLS given its leverage to COVID testing through its pathology unit, all brokers lifted their target prices in July. Credit Suisse noting testing is likely to remain an integral part of earnings into FY22 given the emergence of the Delta strain. EPS estimates upgraded 16% for the coming financial year, target price also lifted 12% to 500c. Morgan Stanly affirmed that sentiment and lifted its price target 17% to 465c. Ord Minnett followed Credit Suisse in upgrading earnings estimates with a 4% increase on prior FY22 expectations. Macquarie observed HLS has completed ~50% of its buy-back program and lifted expectations for the second half given the current run rate. The broker sees scope for margin improvement in the medium to longer term.

HLS is an obvious bottom left to top right performer, improving 55% in the last year, outperforming the healthcare sector which is up only 39%. It has traded close to overbought territory since May, around the time of its Macquarie conference trading update. What is encouraging to see is share price strength in the lead up to results next month on August 30. The May update has de-risked the business slightly and painted a promising outlook from upcoming results. 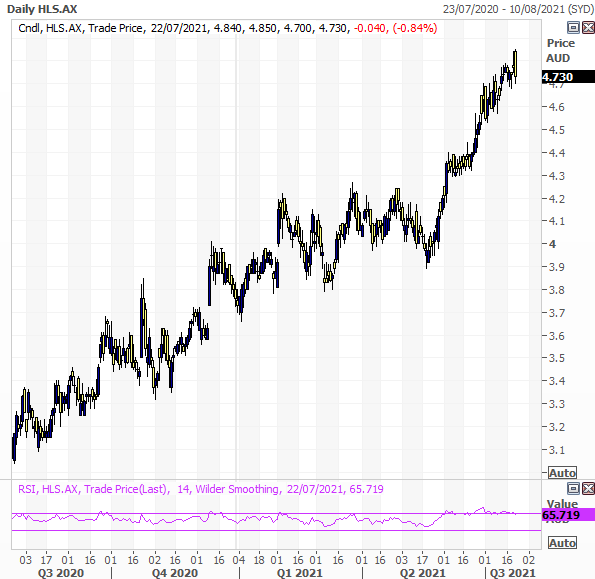 Minimal short interest at less than 0.5%. The peak in December last year came off the back of a trading update, which interestingly was well received. Not the typical dynamic that you come across. It was reversed relatively soon after. 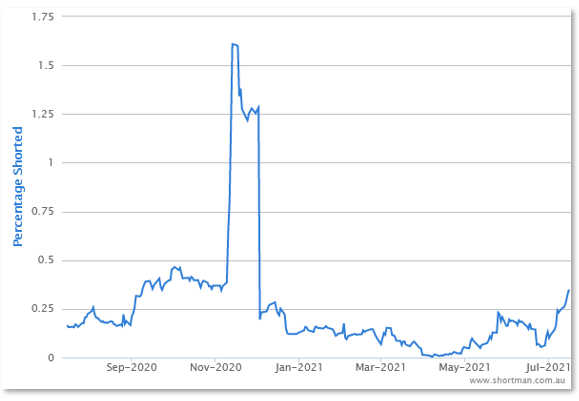