Are you one of the Golden Generation?

I have spent 39 years in the stock market which is an embarrassingly long period of time because the truth is, as Emma keeps reminding me, if I was any good at it she would have been in the Bahamas years ago being waited on by a couple of nannies and a well-cut pool boy. But she’s not, we’re not and many millions of us aren’t.

Well actually some people are, they are the ‘Lucky Generation’ and amazingly most of them don’t even know it. They are the generation of investors in the property and stock markets that have ridden a nearly forty-year credit boom, an engorgement of debt, an access to money previously unseen that created a golden wave of investment returns between about 1974 and 2007, and, after a hiccup in 2008, from 2009 to now.

It all started in the early seventies when my Dad bought a house in Henley on Thames for £35,000 and a year later someone leant over the fence and offered him £45,000. 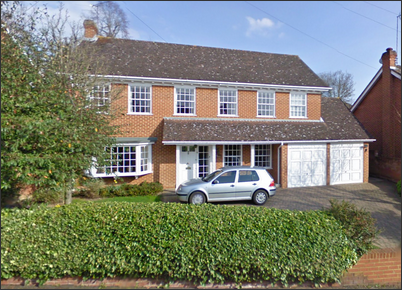 He couldn’t believe it, in those days people didn’t buy houses to make money they bought them to live in and they didn’t go up in price. On top of that, when Dad bought the house it was new. Mum couldn’t understand why someone would want to pay more now that it was second hand. That’s how people thought in those days. They thought he was a crook, they turned him down.

The debt boom caught up with me in the early eighties. I had recently started in stockbroking. I was renting a house in Brixton, it was so plush that Jamie and I serviced our motorbikes in the living room (we had cheap industrial carpets) and I owned a tenth hand Ford Cortina that had a gear stick that came off, a useful anti-theft device in those days. I was happy.

In 1984 I moved brokers to UBS Phillips & Drew, and that’s when it all began when the big international banks arrived in the UK with an access to global money supplies that they then spread amongst their clients, and as a side issue, to their employees.

They offered me a lease car and a mortgage at three times my current salary at a subsidised mortgage rate. Within a month I had moved from Brixton to Putney and was driving a brand new Ford XR3i, a black one with fat racing tyres and go-faster stripes, it is still the best car I have ever owned. 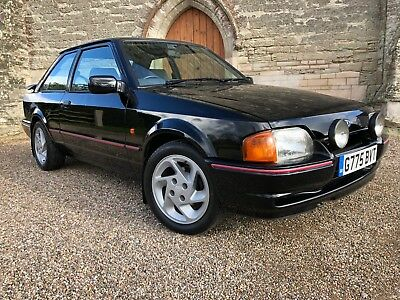 Without planning on it I was suddenly in the rat race of debt and asset price appreciation. The debt didn’t matter, the house went up in price, the stock market was going nuts, I was making an 80’s stock broker’s salary, it was good and there are no regrets. Anyone who didn’t join in got left behind.

Have a look at this chart – my system doesn’t give me ALL ORDS data this far back so let’s use the S&P 500 for equity returns. 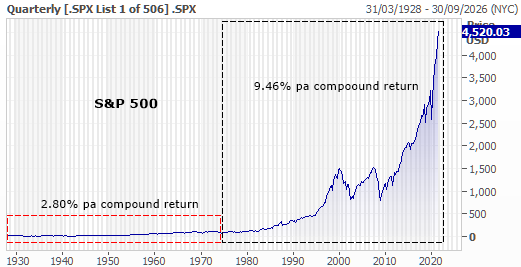 Interestingly in the previous forty-six years when the stock market was going up 2.80% per annum – inflation was at 4%  – so nobody made money. That’s why books like the Intelligent Investor became so popular, because you had to pick stocks to make money, you had to have skills, because there was no underlying tide in the equity market, or the housing market, that made you profitable even if you were a nuff nuff. It was a skill not a norm to make money in stocks. Participation alone was not enough. 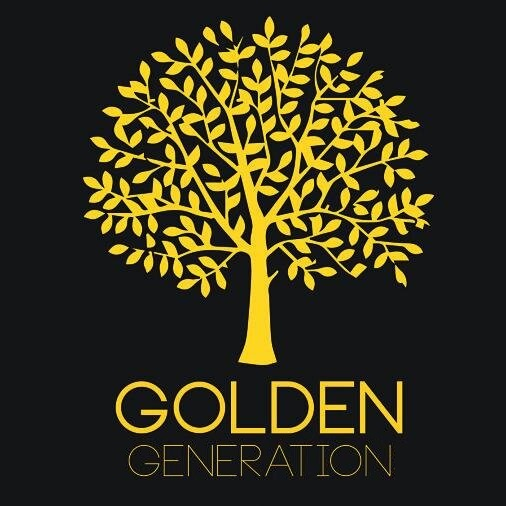 In the next forty years the equity market in Australia went up 38x or 8.09% per annum compound before dividends, about 13.5% including dividends. At the same time, the performance of the banks perverted and indoctrinated the average Australian investor into thinking that capital growth and 7% yields were normal. This was also the period in which my neighbour bought the two blocks of land behind me for £400 whilst I had to pay $400,000, for one (now worth $3m?).

The bottom line is that people who bought houses and invested in the stock market pre-1974 were strugglers. There was no asset appreciation of note. But, thanks to the credit boom (sorry, “Debt” boom) from 1974 until now, anyone who started investing or bought houses from 1974 onwards bought into a truly golden age in which anyone who had the money to invest or the balls to borrow experienced the best investment years many of us will ever see in any of our lifetimes. I’m not sure our kids will experience anything quite so easy.

Net result, if you were born pre 1954 you have enjoyed the whole run (you were 20 when it started) and you can pretty much measure anyone’s net worth depending on how much later they were born. I was a decade and a half later than perfect (born 1961) so caught a lot of it, but not all of it.

Obviously, the GFC brought it all to an end (briefly) but we have recovered from even that courtesy of our willingness and appetite for debt and borrowing which has kept both the housing market and equity markets underpinned.

The end result is that if you’re still sitting on a multi-million dollar house that you paid $80,000 for and a multi-million dollar share portfolio that’s been invested in the banks since the 1990s and has achieved a 7% yield on top without you having to do anything clever at all, then you can thank your lucky stars that you have lived when you have lived. You are indeed blessed. You are the Golden Generation and in that knowledge, you need to understand that your job is not to now sit there whinging about the pitiful return on term deposits, your job is to appreciate how lucky, ballsy or clever you were and focus on not losing it again.

ON THE SUBJECT OF COMPOUND RETURNS and just in case you thought the stock market always goes up. 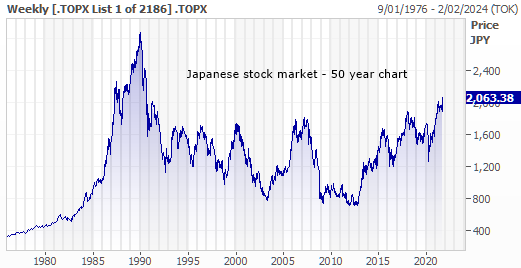