A company that doesn’t require much of an introduction is Harvey Norman (HVN). An Australian retail icon that has been around for donkey's years. The antics of Chairman Gerry Harvey have been in the spotlight recently with the media highlighting his reluctance to hand back Job Keeper repayments after recording a 75% jump in net profit for the year. The stock fell on the results release with an ominous tone for the outlook and a softer final dividend arguably drowning out an impressive year.

The company operates under a franchise system in Australia delivering a raft of retail offerings from technology to furniture under the banners of Harvey Norman, Domayne and Joyce Mayne. 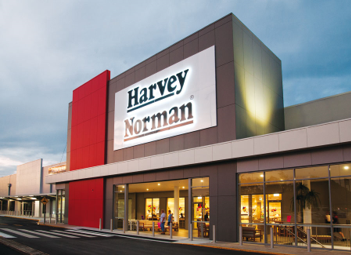 Breaking down the full-year results, total aggregated company-operated and franchisee revenue of $9.72bn, was 15.3% higher than last year. The convoluted revenue number a function of the way it accounts for franchises sales. EBITDA was $1.15bn vs $742.5m a year ago and a fully franked final dividend of 15.0c took total dividends for the year to 35c, up 45% on FY20 (ex-dividend on October 15).

Gerry was seemingly as reluctant to pay a dividend as he was JobKeeper. That caution translated into a big increase in inventory on the back of global supply chain concerns. A decision that got its peer, KGN in trouble earlier in the year. That’s said, HVN touts a far more impressive balance sheet that is able to support the $90m increase in inventories without resorting to discounts. Management noting an extra $300m, $400m or even $500m of stock was not going to be difficult to sell. The difficulty, however, will likely be felt if lockdowns persist into Christmas. HVN counting on a huge ‘boomer’ heading into the season.

HVN also published a trading update that highlighted the disappointing impact of lockdowns in Australia, NZ and Malaysia. Of interest was expectations for offshore expansion which is set to ramp-up towards the end of calendar 2022. HVN anticipates opening up to 8 company-operated stores overseas during FY23: 4 in New Zealand, 3 in Malaysia and 1 in Croatia. 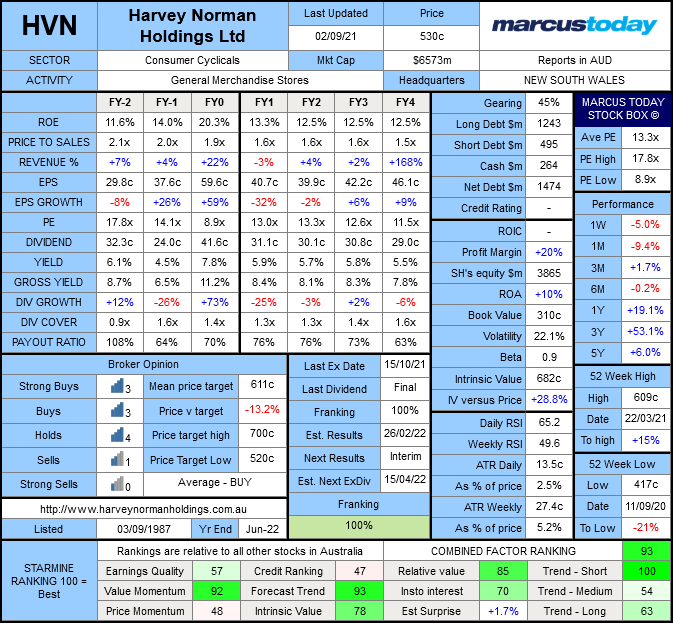 WHAT SORT OF INVESTMENT IS HVN?

HVN is made up of 75% international and domestic retail exposure with a 25% weighting to property. Domestic operations, as pointed out before, are the main breadwinner followed by property then overseas operations. Management's decision to increase store rollouts in international markets is being interpreted as a key differentiator from its competitors like JBH (not really counting NZ). A healthy 8.2% yield putting it in the sights of income-focused investors as well.

HVN has seen the pandemic playbook from last year and expects spending to recover in the same way when lockdown restrictions were eased in its overseas markets due to pent-up demand. The issue for HVN will be the expected transition from spending on ‘things’ to spending on travel if borders are reopened at those key 70-80% vaccination rates. There just might be a few more people interested in a trip to the Whitsundays than an air fryer at Christmas.

On a more positive note, consumer spending is showing no signs of slowing down, up another 1.1% in Q2, with growth in spending at multidecade highs according to the last figures from the ABS. That said, Q3 is likely to be a different story given lockdowns and the unwinding of government stimulus. Perhaps Mr Harvey is right to be cautious about the year ahead. This year's bumper result is likely shaping up as more of a burden than a moment of celebration as questions about the sustainability of those numbers filter in.

The full-year result was met with a generally positive response from the brokers which pointed to property and consumer tailwinds in Australia and NZ. HVN’s international operations revealed varied performance. Ireland beat expectations while Asia continued to struggle, with analysts particularly concerned about Malaysia.

Credit Suisse described results as incredibly strong, albeit in line with expectations. Macquarie increased EPS forecasts citing offshore expansion throughout FY23 and FY24 as the main motivator. Management flagged higher inventory levels given supply chain pressures (chip shortages, factory delays, port & shipping issues) to cope with what is expected to be a record Christmas. UBS was the most optimistic with a raise to the target price of 50c, to 700c and rating as Outperform.

Harvey Norman is up a modest 17% year to date, trading between 510c and 600c since the start of the year with obvious support at ~500c. Despite the record result the stock has fallen ~4% since the release. The chart overall doesn’t engender much of a bullish feeling given the tired, sideways trading range HVN has been in for most of the year. An optimistic chartist would likely point out the possibility of a bounce back into the top half of its trading range given the pattern the share price has followed for the last 12 or so months. That theory is likely to be validated if vaccine and reopening momentum accelerate into the end of the year. On the other side of the equation, even if HVN was to find support and push off it, recent efforts to puncture resistance at 590c have been convincingly denied. Other observations: RSI is hovering just above oversold territory. Momentum continues to be pressured in the short term with the MACD well below the ‘signal line’. When the MACD crosses below the signal line it can be interpreted as a bearish signal. 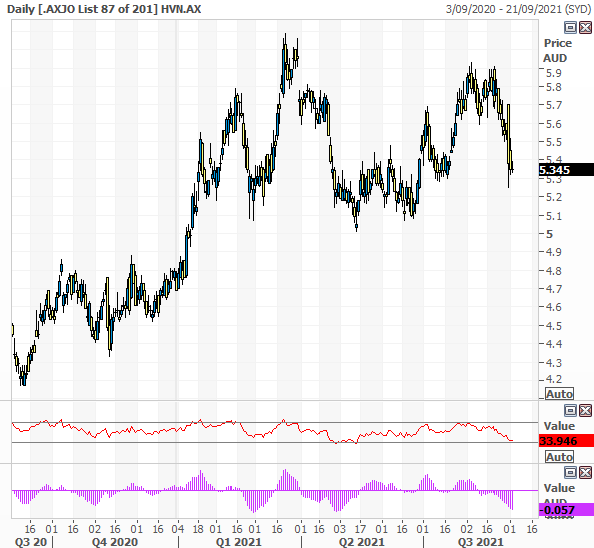 Nothing groundbreaking to take away from the top investors report. Deutsche Asset management picking up almost 3m shares at the end of July the most recent notable transaction. 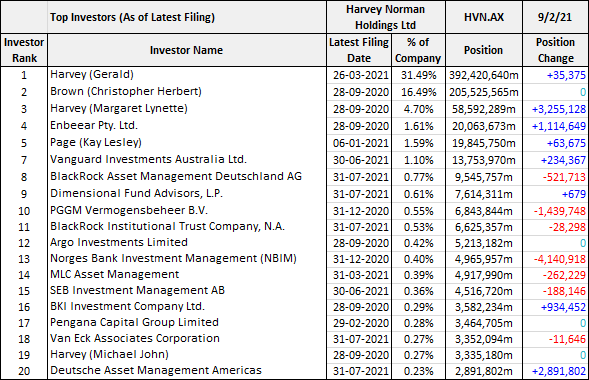 HVN is chaired by Gerry Harvey who established the business in 1961. Kay Lesley Page is the CEO joining the company back in 1983 and was appointed the top job in October last year. Chris Mentis is the CFO, joining in 2007. Rolling through the management list there are many long-serving directors and executives which could be interpreted as a benefit. A strong team is built around culture which typically happens with low management turnover.

A healthy level of shorting is expected in a company with a $6.7bn market cap. At just above 2% shorted, it isn’t something to worry about. The negative/sideways trend should alleviate any anxiety as well. 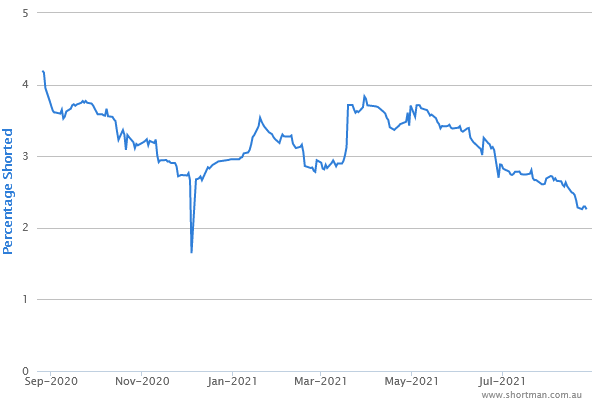 HVN has weathered the pandemic well, but the market remains decidedly cautious about the path forward. HVN’s share price is reflecting softer trading conditions in the first half of FY22 and supply chain pressure heading into the most crucial part of the year. The trading update revealed a near 20% drop in sales in Australia in the first several weeks of the new financial year driven by lockdowns. Christmas will likely be the make-or-break period and management is mindful of that, loading up on inventory in anticipation. Brokers are all bullish although price targets don’t imply much upside. The technical picture isn’t inspiring with HVN trading in the bottom half of a fairly well-defined sideways range. The market has moved on from its strong results as is now waiting in anticipation for what’s around the corner. Cautious decisions from management not fuelling much confidence. That said, HVN does have a strong balance sheet and solid fundamentals on its side with no blindingly obvious reason to be selling heading into the ex-dividend date on October 15. It will be interesting to see how the HVN performs after trading ex-dividend, no doubt vaccine momentum and travel restrictions will play a large role. HOLD.