Imugene (IMU) is expected to move into the ASX 200 in the December quarter rebalance. If that happens, fund managers that are benchmarked to the ASX 200 index must consider buying it, and passive funds have to buy it. It also puts the company on the radar of more investors and research houses. For some companies, that is not always good news. More attention can invite more criticism.

IMU is a biotechnology company that develops cancer immunotherapies. Its aim is to create a range of new treatments that seek to activate the immune system of cancer patients to identify and eradicate tumours. In August it was the newest billion-dollar biotech on the ASX and inked a strategic partnership with Nasdaq listed Celularity for the treatment of solid tumours. In September it joined the ASX 300 index.

There is a lot of jargon about what the therapies are trying to achieve and how they do it which can confuse those without a molecular biology background. The best way to understand the business is through its three novel technology platforms shown below.

In simple terms, onCARlytics attempts to obliterate solid tumours. CF33 Oncolytic ‘armed’ virus delivers a direct payload to the tumour cells to kill it and B Cell immunotherapy looks at targeting cancer cells in a safe and natural way by getting a patient’s immune system to produce antibodies against the cancer.

The Chimeric Antigen Receptor (CAR) T cell therapy (onCARlytics) has been one of the recent catalysts for the share price. There were multiple groups trying for more than a decade to achieve what IMU did which was combine the treatment with an oncolytic virus capable of targeting and killing solid tumours like brain, ovarian, colon, lung and bowel cancer.

The pipeline below shows how far along each treatment is in the development timeline. Clinical trials typically have four stages. Pre-clinical can take anywhere from 3 to 6 years. Phase i, ii, ii (combined) can take between 6 to 7 years and regulatory review/manufacturing up to 2 years.

It is important to recognise that all therapies are in the clinical stage of the process. All programs are fully funded following the recent capital raising and have intellectual property rights that extend to 2038, the shortest expires in 2036 which means there is a long runway to develop the therapies. It also means any big pharmaceutical company that takes them on for development will have a long life of being able to exclusively market the products. At the end of the September quarter, Imugene had $112.2m in cash and cash equivalents it believed would provide ample cash to support its clinical pipeline and operations through 2025. 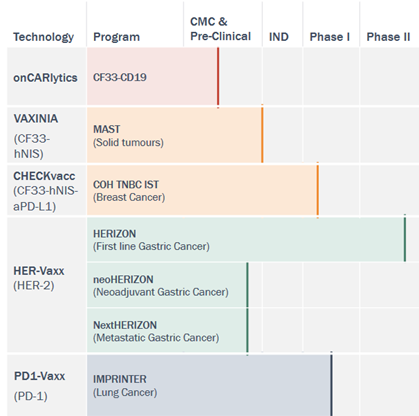 Bell potter at the start of September upgraded it to a speculative buy recommendation. Target price lifted 108% to 52c citing the potential for new therapies to be attractive to future development partners and updated EPS forecasts to account for the recent $90m capital raising. Added the recent funding round was extremely well supported by institutions both in Australia and Asia.

Paul Hopper started the business in 2013 and has an impressive track record. Previously involved with Viralytics, which was sold to MSD for $502m. Hopper has purchased more than 100m shares on Friday last week. Vanguard also topped up its holding by more than 125m shares on September 30. 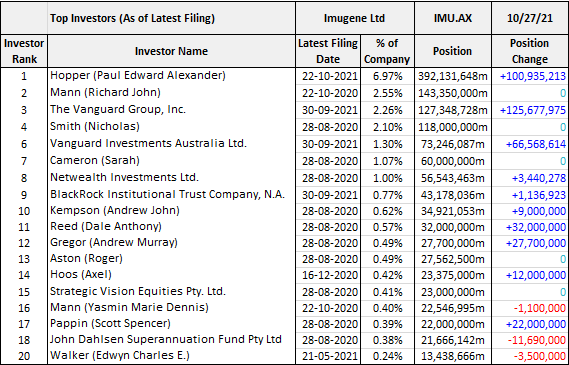 The share price is up more than 800% in a year recently topping out 51.5c last month. It had a wobble back to 40c but has recovered and is now edging closer to resistance ~50c. RSI is not in overbought territory and MACD forest is pushing above the signal line which can be regarded as a bullish indication. 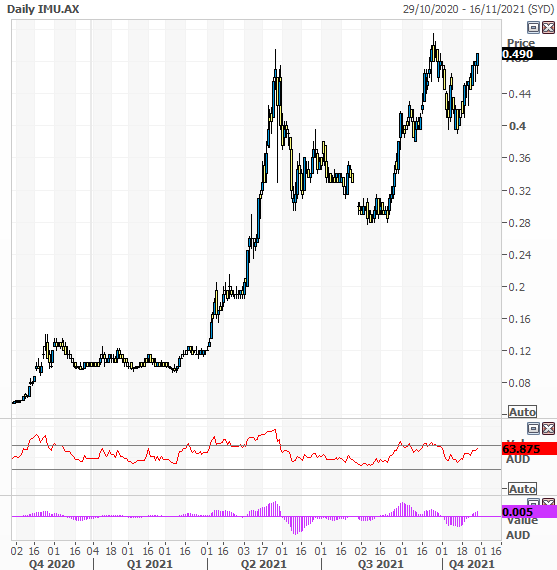 With almost no fundamentals and all treatments in the clinical stage of the process, it is a difficult company to value. You are paying for future earnings and volatility comes part and parcel. It doesn’t generate any revenue from product sales and isn’t expected to for a little while. Its CAR-T cell therapy has been described as a blockbuster drug and while the program will likely take years to develop any comment on effectiveness is expected to garner a lot of interest. Bell Potter pointed out a US$11.9bn deal Gilead inked with Kite Pharma in 2017 as a gauge for possible upside. The company will be very sensitive to updates with the AGM on November 19 the next key source of information. Another point to consider is that while the treatments all sound fantastic, none are guaranteed commercial success. You need to believe in the long-term story and you should expect to hand over cash on that journey as well. Capital risings are how it stays operating and researching. Treatments don’t pop up overnight and take years to be developed and approved so sentiment can be easily influenced by market forces and the heard losing interest given such an emphasis is placed on future growth. Several milestones are dotted throughout the next 12-24 months, IMU needing to essentially feed the market updates to ensure appetite is elevated. Not a stock for a value investor. It is speculative and like most biotech companies, has massive upside but patience is necessary. It is an easy story to buy into and it is encouraging to know management has done it before and brought a drug from bench to bedside. The price is also expected to be supported by the index inclusion. Speculative BUY.