So there I was in my broking office in 2007, before Christmas, before the New Year, when the phone rang. It was a financial journalist. I lifted. A bigger loser than me. Working the Christmas shift is no fun, and finding content to fill a whole newspaper for two weeks was a job I had some sympathy for.

He was doing the usual thing for that time of year, ringing a few brokers, getting a few predictions for the year ahead. An obvious filler for the business pages. He was running a “bit of a competition” he said, trying to raise enthusiasm from the grave, to guess the ASX 200 level at the end of next year.

Well any broker with half a brain will tell you that you the only way to win a stock market guessing game is to own the infinite upside or downside. So I asked the range. The high was too high so I went low.

Next thing I’m on the front page of the business section on January 1st 2008 predicting a crash. Much to the horror of my broking firm, my clients and myself.

And this is how I predicted the Global Financial Crisis and the stock market collapse of 2008. 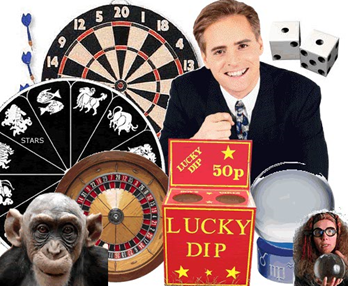 As any honest broker will tell you, predictions are the mother of all downfalls. Ask any broker who’s been fool enough to volunteer to run a hypothetical portfolio in a national newspaper. Getting thrashed at portfolio management by a dartboard, an astrologer, a monkey and one of the Oarsome Foursome is not something a financial professional recovers from.

And that’s what will happen, because the odds are four to one against you winning, and you know why? Because this is a tough game and on any timeframe shorter than Warren Buffett’s, the only predictable thing about the stock market is that it’s not predictable and a monkey is just as qualified as a financial professional to predict the stock market in the short term.

So let me tell you what the prediction for 2022 is going to be. With the market at 7350 (as I write) the almost guaranteed conclusion of any ‘poll of equity market strategists’ is going to be the prediction that the ASX 200 will finish 2022 at 8011. How do I know that? Because that’s the safest prediction without looking stupid. 8011 on the ASX 200 represents a nine percent gain from here.

Why nine percent? Let me tell you a story.

Back in the 1980’s I was working on the open plan broking desk of UBS Phillips & Drew in London. There were two hundred brokers in one room all of whom could shout and hear each other at all times. Each morning there was an “Open Mic” meeting on the floor during which the analysts and economists at UBS Phillips & Drew would tell us things designed to create business. Insights about stocks and the economy that would make even the dullest amongst us sound informed.

One morning a well-respected economist stepped up to the Mic. He was retiring. This was his last day, his last morning meeting and his wisdom went something like this. “I have agonised over this last presentation, determined to say something that was memorable. Something you could remember me by. Something that would stay with you for the rest of your lives and be attributed to me. A legacy”. He paused wistfully. “So what could I possibly tell you today, at my last ever morning meeting, that would live on through the eons to come. I asked my wife. And last night she gave me this reply. “You’re an economist darling. You’ve been giving them useless statistics for fifty years. For once, just once, give them a statistic they can use”.

He had worked out, he told us with much satisfaction, that “I have calculated the average statistic of all financial statistics over the last fifty years. And it is 9%!” The average interest rate is nine he told us, the average return on equity is nine, the average growth in house prices is nine and although it seemed irrelevant, it was powerful. Armed with this piece of information he told us we could now confidently answer almost any financial question we were ever asked. “What’s the return on capital employed of the Brazilian subsidiary of ICI?” he suggested. Well, there’s a very good chance it is nine he told us. Tremendous stuff for an industry that survives on confident guesswork.

And so we went to work. What’s the average annual compound return from the stock market? Nine percent we told everyone, and using nine percent plus dividends, and compounding that, we told prospective clients that in the stock market they could expect to double their money every six years and triple it every ten. And we said it confidently, and that confidence is what mattered. It is the golden rule of selling financial products. The more confident you sound, the more you sell. And armed with the integrity of nine percent, we were confident.

But the stock market return is not 9%, it is variable, and whilst you can select any appropriately optimistic average return from history-based depending on your time period, the truth is that over the last seventy-five years the Australian equity market has returned seventy-five individual annual returns from plus 80% to minus 40%, and, laughably, none of them were the same, and none of them actually matched the statistical average exactly.

Stock market prediction it turns out, is a game, a hilarious game of fluffy guesswork on which reputations can be made but are, conveniently, rarely lost. And it will never end, it will never be closed down for its lack of integrity, because humans, and human investors in particular, need certainty. They need predictions. It’s the lighthouse effect. Shine a light in a fog and people will use it as a reference point. And interestingly, there is a phenomenon that suggests that the more unpredictable an outcome, the more ‘herding’ and belief a prediction achieves.

So I have absolutely zero confidence in the predictions for the ASX 200 to hit 8011 next year, but I can tell you, they will be grouped around 8000 because it’s a nice round number and implies an almost perfect nine per cent gain. Nine per cent is what the employers of the strategists of the product selling institutions want to hear, because it injects certainty, sells product (Managed Funds) and product selling institutions are where most of Australia’s high profile strategists and economists are employed. Economists and strategists whose job is not to accurately predict the future, they are all smart enough to know that foolishness, but to mollycoddle clients into a sense of security or ‘safety’ so they buy more products and stay in the products they’ve already bought. Imagine the job prospects of a big institutional strategist if they predicted the market was going to fall. Their sales teams would crucify them for crucifying their commission prospects.

Ultimately, predicting the level of any stock market in twelve months time is just a marketing game conducted and concocted as the backdrop for a sales script, and whilst the bulk of strategists remain the employees of large product selling institutions, it will not change.

The only stupid people are the people who believe them. This year could bring anything, and whilst forecasting an idle nine per cent gain is as reckless a misdirection as predicting a crash, the only reckless people are those that choose to believe it, those that put their faith in a strategist with an optimistic motive purporting to predict where the market capitalisation of 200 separate stocks added together will be this time next year. Laughable.

Anyone who has been around the market knows the folly of taking any of this seriously. At least the dartboard, the astrologer, the monkey and that member of the Oarsome Foursome knows it’s just a bit of fun. The problem comes when high profile financial strategists and ‘commentators of influence’ don’t know they don’t know and predict with confidence, and when people that don’t know they don’t know, take them seriously.

I suggest you enter 2022 with no expectations, it’s more honest.

Beginners Education – The Folly of chasing Dividends and Franking
September 3, 2021