The nickel price has been on a significant rally for some time. The contract on the London Metal Exchange (LME) jumped to its highest since August 2011 in recent days. Sharp gains in the price have been fuelled by rising demand and shrinking inventories worldwide but the bigger picture is the electric vehicle theme and the global push for decarbonisation.

Nickel unlike other battery materials is not primarily consumed by EV manufacturers, ~70% of the world’s nickel appetite comes from the stainless-steel sector with the battery sector making up a scant 5%, although it is expected to reach 35% of total demand by the next decade.

Battery nickel demand is anticipated to surge over tenfold this decade as the EV boom takes off. This is because the production of nickel-rich cathodes in lithium-ion batteries requires a high-purity Class I nickel. Traditional stainless-steel feed of nickel pig iron (NPI) is not suitable. Tesla CEO Elon Musk last year reaffirmed the importance of the metal to lithium-ion batteries, cautioning about the possibility of demand outstripping supply in the near future.

Nickel mines (NIC) is an ASX listed miner focused on producing nickel pig iron (NPI). You would be forgiven for thinking it is in the wrong game at the moment, which is partly correct. We will get to that. Its main operations are in Central Sulawesi, Indonesia, are the Hengjaya Nickel and Ranger Nickel rotary kiln electric furnace (RKEF) projects. It owns an interest in the Angel Nickel Project and recently purchased a 70% interest in the Oracle Nickel Project which puts NIC on track to achieve 100ktpa of nickel output in 2023. That achievement would make it a bigger nickel producer than BHP. An impressive achievement given first production was in January 2019. Mind you BHP has only just embraced the nickel story after years of indecision. 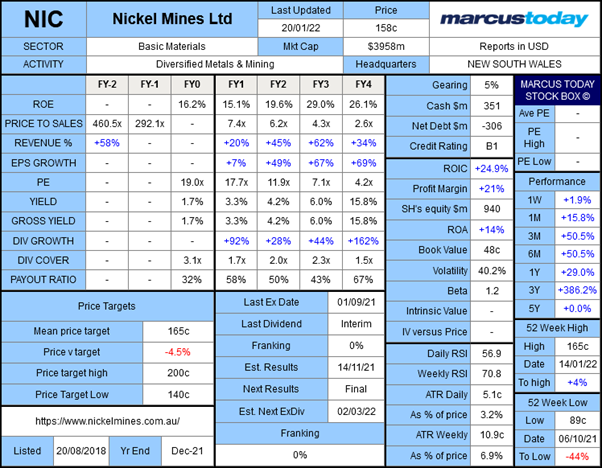 What sort of investment is NIC?

NIC is a resources business. The chart below highlights the incredibly close correlation to the nickel price which tells you that regardless of how good management is, how efficient the business is at using its assets to generate a profit, the underlying driver of the share price is the nickel price. 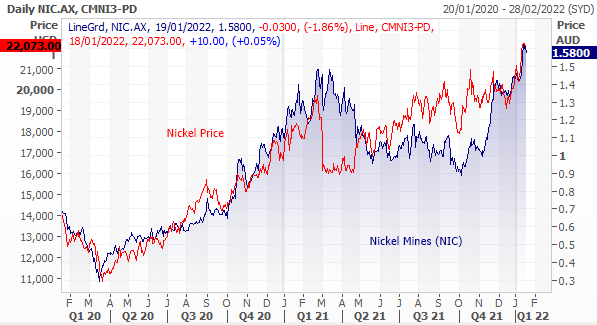 What is garnering the most excitement recently is NIC’s next phase of growth. It signed a deal last November with Shanghai Decent Investment Group to look at developing a High-Pressure Acid Leach project (‘HPAL’) which would see NIC produce battery-grade nickel. A potential game-changer for the business. A step into the battery space not only ties it to one of the biggest market themes but also increases the scope for purchase agreements with EV manufacturers who are becoming increasingly active in sourcing battery-grade materials. A focus on reducing CO2 emissions from production is another pleasing goal. NIC recently signed a deal with an Indonesian energy provider to implement 200 megawatts of solar capacity to help power its operations.

A few points on risk to mention: Firstly, the level of sovereign risk NIC has operating in Indonesia. There was talk back in September of a possible export tax, commentary highlighted discussions were in an early stage. Secondly, there is also some political risk in the partnership with Chinese company Tsingshan (the parent of Shanghai Decent Investment Group) although the partnership is currently considered solid. Thirdly, with more than half of the world’s nickel demand consumed by China, there are some concerns the economic slowdown could weigh on their appetite. A shift in focus from the property sector crisis to stimulus and support for the economy is helping alleviate some of those fears.

Brokers are bullish although price targets don’t imply much upside. Given the recent jump in the commodity, targets are arguably a little behind the curve. Price targets for miners could almost be ignored. The value of NIC comes from its correlation with the underlying commodity which it sells and that changes daily. Many brokers have not upgraded nickel price forecasts yet and that could drive NIC valuations higher. Macquarie said OUTPERFORM following a Chinese communist party meeting back in December which revealed a pro-growth agenda. Upgraded its view on base metal miners on the news. NIC, PAN its picks for the sector. Target of 170c implying 4.9% upside. JP Morgan said ACCUMULATE, preferring NIC over IGO. Target price of 145c was up 32% from its prior target after a review of NIC’s latest growth project, Oracle. Citi said BUY, observing its most recent deal positioned it to become a global top ten nickel miner. Target of 155c, 4.32% downside implied.

No obvious trend in the last year. The share price up ~33% in that time, mirroring the performance of the nickel price. The big jump back in November came from the deal with Decent, securing its ‘next phase of growth’. The share price has recently moved back from overbought territory. RSI sitting on 68.9, a reading of 70 indicates overbought conditions. The MACD forest is just holding above the signal line, momentum taking a breather after a more than 70% rise in the last few months. NIC bottomed at 89c on October 6, 2021. Hit a year high of 165c on 14 January 2022. 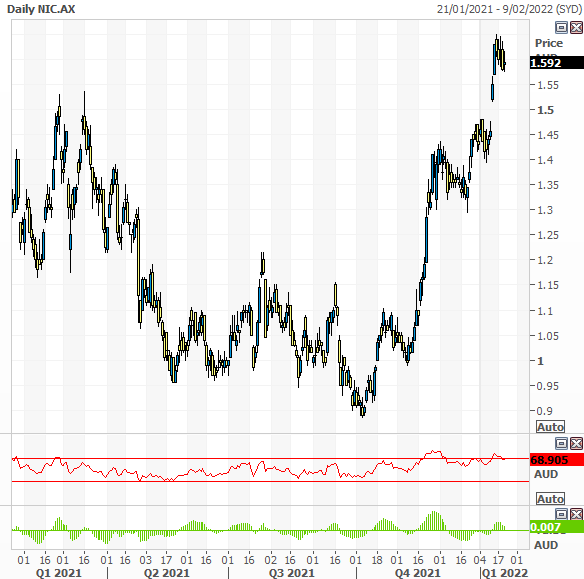 Encouraging to see almost every major shareholder increasing their exposure in the last year. Top shareholder and partner Decent notably picked up more than 70m shares back in August. 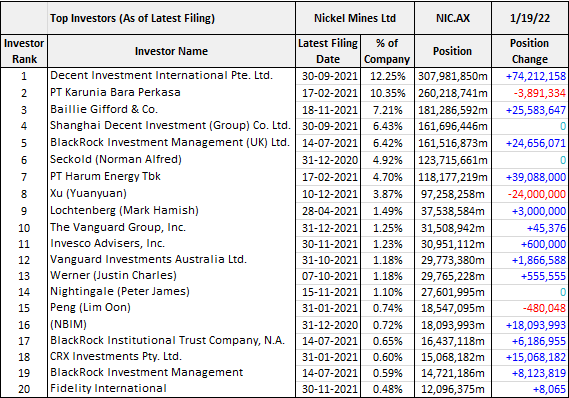 Nothing to worry about with a short interest of less than 1%, down from almost 3% at the end of the 2021 calendar year. 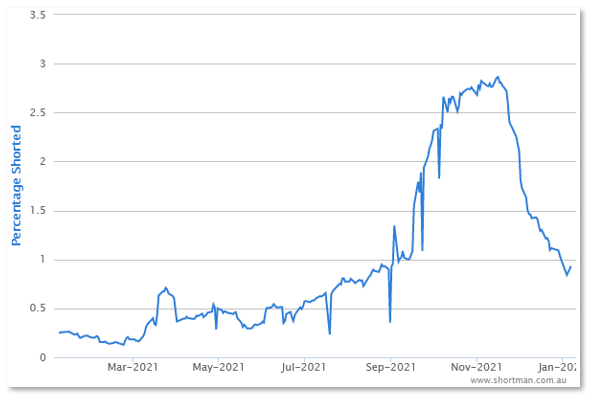 Nickel mines is a bet on the nickel price. For that reason, it is better to not look at the company through the ‘set and forget’ lens. If the nickel price tanks, so will NIC. The demand for battery-grade nickel is expected to remain robust and that is what the market is getting excited about given NIC’s deal to develop a process to achieve battery grade quality. It is important that NIC continues down its path of using renewable energy sources to power its operations as the environmental impact of that conversion process is substantial. Supply deals with EV manufacturers, progress on its nickel matte conversion process and increased production following its recent purchases will be future catalysts as will results on January 27, 2022. Brokers are bullish but target prices imply little upside. Resource price upgrades and spot moves will likley help those targets move higher. Encouraging to see top investors increasing their exposure. Fundamentals are solid and well ahead of peers in IGO and WSA. The share price has run hard into quarterly results from a bottom of 89c in October although is starting to cool off. Given the results risk, it could be prudent to wait until the results on January 27th before jumping in.