Henry on the Banks 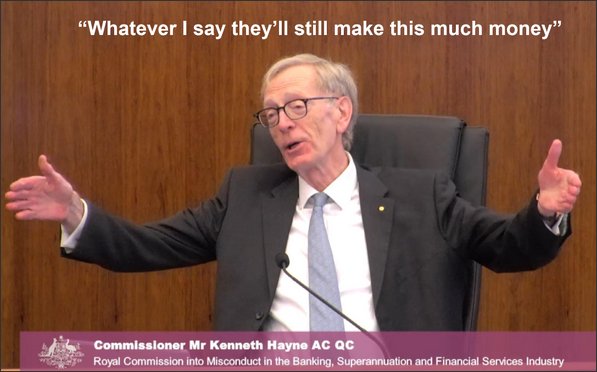 Henry on the Banks. Hands up who remembers the Hayne Royal Commission into the Banking Industry? You must remember it? Surely it was game-changing. All those banking chiefs heading to Canberra and court wearing hair shirts, saying sorry and falling on their swords? Remember that? Remember ‘thingamabob’ from CBA resigning and ‘whatshis’ name from WBC finally going? Remember the hot shot lawyers going for gotcha moments in court similar to a AC12 interview with a ‘fella’.

Remember those days when the politicians were fanning the flames with the compulsory bank bashing game. Nasty evil banks. Corrupt banks (something about he who is without sin?) and charging dead people fees. Ah, halcyon days. Indeed. But what became clear at the end of the process was that the big were ultimately just too big to fail. Way too big. The biggest and best building in any regional town was a banking hall. A splendid money palace (now a trendy café serving oat milk lattes). These monuments to money were deliberately ornate and imposing to give us a sense of a solid institution that could be trusted. Some of the CBD money palaces are truly works of art. Marble, gilded finishes, statues. No wonder we trusted them. Now it seems that everything is virtual and maybe so is our trust.

The banks used the Royal Commission to chuck out all the problem businesses. ‘Shrinking to greatness’ was the mantra. In the process, they have all become glorified building societies. Massively exposed to the housing market. Pretty competitive out there too in mortgage land, have you noticed the amount of pop-up ads that Macquarie have for their mortgage business? Must be lucrative if Macquarie wants in.

The point is the banks are machines. They just print money. The machine rolls on doing what it does best regardless of which monkey pushes the on button. It is relentless.

Nothing stunning but for WBC that is probably a good thing as they have had a habit of being the QBE of the banking giants. Always ready to surprise but not in a good way. No surprises and cash earnings of $1.54bn. The machine. There was some focus on the NIM being only 1.9%. Only. We have seen a whole investment bonanza of fintech and BNPL companies valued on revenue and the ever-shrinking merchant margin. If you wanted to apply the same rules to the banks, counting house sales and mortgages as ARR and taking a 1.9% margin on all those mortgages, “Wow”, wouldn’t you be happy.

The banks were supposed to be killed by fintech’s. BNPL was supposed to smash them. Where is Z1P now? Valued at $1.7bn and a fraction of its highs. Not a cent of profits. 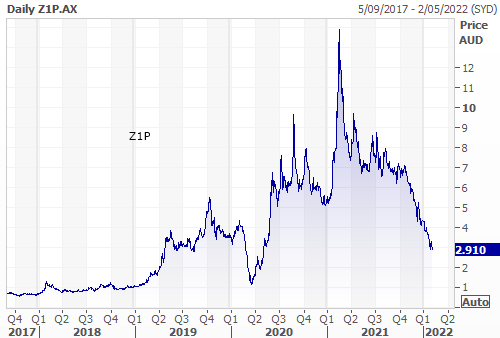 Where is APT, now SQ2? Luckily for them you can’t get a chart of APT now – not listed – gone. A shadow of its former self. And neither, no matter how big they pretend to be, have, or maybe ever will, make any profit. WBC made a statutory net profit of $1.8bn in one quarter. And where are the alternative merchant payment systems? Where are TYR? $1.1bn market cap and going down and down. Down 50% since September last year.

The sad (if that is the right word) part is that the banks have built a fortress around their businesses. You need s big wall if you want to protect a money printing machine. OK, so some years are a little worse, some years a little better. And some years they have to suffer the gross indignity of having to appear in front of an enquiry or answer to a Royal Commission. But the machine rolled on, and after the WBC results yesterday, rolls on, and in the CBA results next week, will continue to roll on.

I came up with my Big Bank Basket some years ago during a machine wobble. At the time you could buy all four of the major banks for @ $100. The 100-buck chuck. It had peaked at $215 in March 2015 and saw its pandemic lows (woes) at $107. Here we are at $167 and off its recent highs of $190. And this simple basket takes no account of dividends. But it gives you an easy idea of where things are. 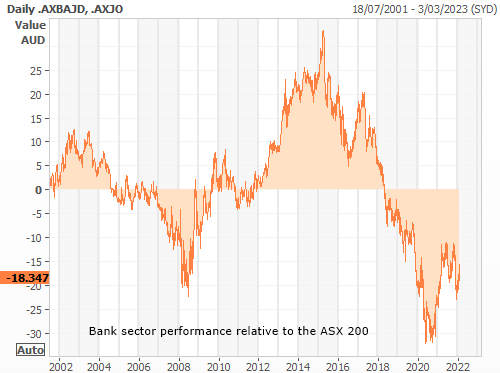 Banks are 25-30% of the ASX and coupled with the big miners, those two sectors cover most of the bases of our economy. Whilst there are headwinds in banks a 1.9% NIM for WBC is still pretty good in a booming property market. Yes, it is still booming. Just not quite as quick as before as things appear to be topping out in the hot spots.

Australian property has been a magnificent investment. So much so that the basic human right for shelter and the dream of owning your own home is now just that for many young people. A dream. Houses went from somewhere to bring up a family and call home to a speculative investment choice thanks to government inducements. Airbnb has provided a valid way to justify the extraordinary prices for homes. If you can rent out your home out for this then it must be worth that.

Funny how Airbnb started life as a way for people to share their homes with travellers who wanted a genuine experience. It has now morphed into just a booking service for holidays and short stays. Much like Uber. Wasn’t it supposed to be a ride sharing app? People going places and giving others a lift for some money. It just became an unlicenced mini cab despatch system taking billions off people scratching a living in a cab. Sorry…”Car”. They’re not Cabs.

Back to the point. The WBC results tell you that the machine will roll on. Dividends will still flow to shareholders, and it really won’t matter who runs the bank, the machine just does its thing. CBA next week and Macquarie also due soon.

At these levels I do not mind WBC for a rerating over time, but it may take a while. And I’m in good company.

It will trade at a discount until there is more evidence they are on top of things, but it’s making steps in the right direction. Cost cutting always goes down well with analysts. WBC is trading at ~10% discount to NAB and ~5% to ANZ. Likely to stay that way.

In this market an added attraction becomes obvious, the banking sector is less volatile than tech and growth stocks, so it offers a safe(r) haven in times of turbulence and uncertainty, which looks like the pattern in 2022 at the moment.

And going forward – it’s an election year – that should provide a bit of political largesse to support the consumer, and banks and the property market like a plump consumer.

Broker research summaries on the other Banks: